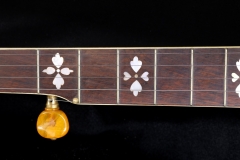 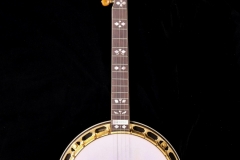 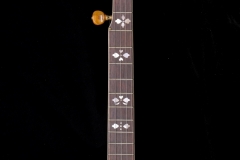 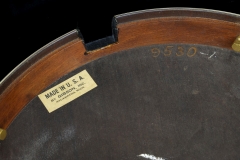 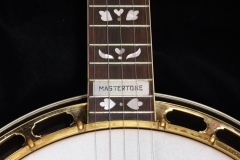 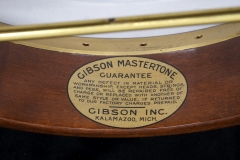 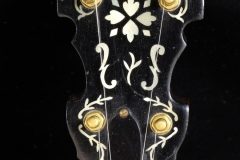 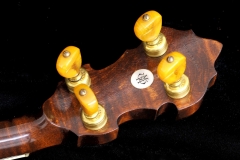 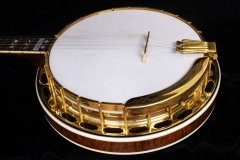 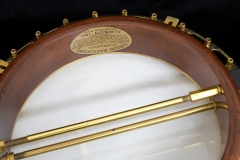 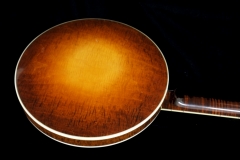 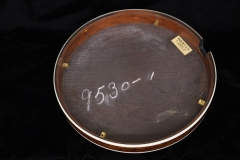 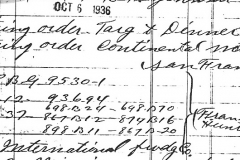 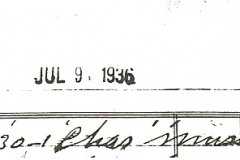 RB-Granada #9530-1 dates to 1930 (see Gibson banjo serial numbers vs. factory order numbers) but, like many higher-end Gibson instruments, remained unsold at the factory for a number of years.  The banjo was shipped on July 9, 1936 to the Charles Music Company (location unknown); the Charles Music Company returned the banjo to Gibson and it was shipped a second time on October 6, 1936 to Francis, Day and Hunter, a large music retailer in London, England.  #9530-1 was reportedly bought for one of three daughters of a Scottish family named Woods, but was never played to any extent and therefore remains in as-new condition.  The banjo conforms to standard specifications for the RB-Granada of the period with the exception of the armrest engraving, which is the pattern used on Gibson’s style 5 of the 1920s rather than the pattern normally used on the Granada.  The original Grover tuners feature large Catalin buttons; in common with most instruments shipped outside the United States from the Gibson factory, there is a “Made in the U.S.A.” stamp on the back of the peghead and a “Made in U.S.A.” sticker inside the resonator.  A rare additional “Made in the U.S.A.” stamp also appears inside the rim.  The back of the peghead features a mother-of-pearl inlay engraved with the original owner’s initials.

Photos by Lynn Dudenbostel courtesy of an anonymous owner.