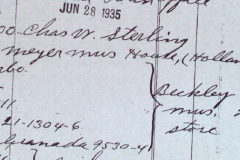 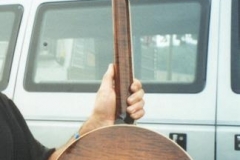 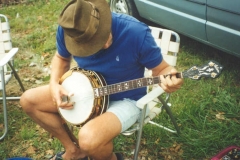 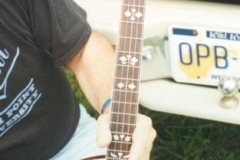 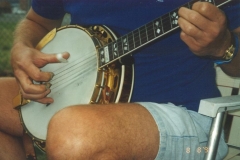 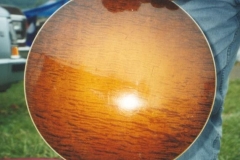 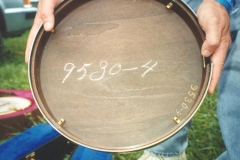 RB-Granada #9530-4 (see Gibson banjo serial numbers vs. factory order numbers) dates to 1930, but was not sold until it was shipped on June 28, 1935 to Beckley Music Store in Beckley, West Virginia.  The name of the banjo’s original owner, Jack Cozart, appears on the factory-engraved personalized truss-rod cover.

This instrument is currently in the hands of its third owner.  In most respects it conforms to standard specifications for a 1930s Granada:  The wood is highly flamed curly maple with a sunburst finish on the back of the resonator, the hardware is gold-plated and engraved, the flange is one-piece, the tone ring is a high-profile flathead with twenty holes, the peghead is double cut, and the fingerboard is Brazilian rosewood.  However, this banjo’s inlay pattern is somewhat unusual; the fingerboard is inlaid with the hearts and flowers pattern while the peghead is flying eagle.  This same combination can be seen on RB-Granada #9530-5 which for many years was the primary banjo of Wade Mainer.

Owner Dave Sweet of West Virginia gives some history on the banjo:

“I first became acquainted with her when I was a banjer player sprout doing a gig at a reunion with some folks. One of the reunionees, Mr.Cozart, was amused by the fact that a youngin’ was playing the banjer… He told me he had an old banjer out in the trunk of his car if I wanted to see it.  Now Mr. Cozart was a peculiar ol’ feller…even then…and he looked like Wade Mainer’s twin brother…honest! When he produced the old banjer from his trunk…it was filthy dirty. Upon brushing across the strings, a virtual cloud of rust rose that was so thick, that I actually choked on it.  But the tone!!!  Even though I was a small fry, I recognized the sound as being identical to Earl’s banjer. I stood out there in the parking lot playing the thing for hours until the people I was riding with got
impatient and whisked me into the car. When I returned home, my mom met me at the door with a handful of cold and crusty mashed potatoes, and smearing them in my face, said, “Supper’s been cold for 3 hours!  Where’ve you been?”  When I ‘splained to her what I had just played…she apologized for the cold taters to the face.

After that, my dad took me to Jack’s house once or twice a week to play the banjer. It went on for years like that until I obtained a driver’s license.  In fact, since I was more into banjers than girls, getting to go to Jack’s as often as I liked was the primary reason I learned to drive…

As early as I can remember, the banjer could only be played from the nut to the seventh fret as the stretcher band protruded above the neck, rattling strings any further than that point. Sometimes, when I visited Jack and Charlotte, he had her stuffed with socks to tone her down a bit. Mr. Cozart told me that he sold moonshine for $2.50 a gallon to buy the Granada from Beckley Music Center (long out of business) for $250.00. He said, “As I paid cash, they threw in the hardshell case”. He ordered it five-string as he was a clawhammer player and he liked the Flying Eagle inlay on the headstock and had it ordered that way. In 1935, most folks around here were on starvation. $250 was more money than an entire town had at its disposal. My dad made $75 that year working in the coal mines. That was about the norm for guys in these parts around then. If you didn’t grow your own food…you starved. Jack told me of his extravagant purchase, ‘I had more money than I had sense.’ So, it is VERY unusual that such an instrument would find its way into these hills at that time.

Mr. Cozart used to enjoy telling me about Uncle Dave Macon visiting him to play the banjer whenever he happened through West Virginia. He said that Uncle Dave said, “This is the best banjer I’ve ever tuned, and I’ve tuned a many.” According to local banjer historian, Jimmy Costa, Dave Macon played the banjer in a show somewhere around Bluefield.  I don’t have a letter, it’s a video of Mr. Cozart holding Charlotte, while answering questions about her. Cool stuff! Man, you could see the sparkle
return to the old man’s time-crusted eyes when he talked about her…he LOVED this banjer! (I do too! And I dug the Ol’ Man. He was a piece of woik.) He was connected to my family in a way. He used to tell me how he and all the other neighborhood children would gather at Aunt Ruthie’s house (my Mother’s Grandmother) in the evening to be frightened senseless by her ghost stories...”