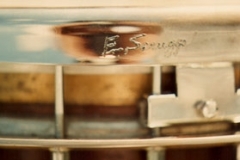 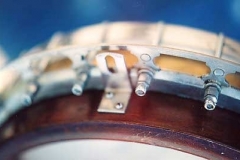 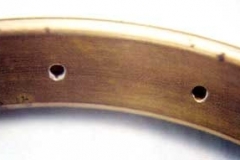 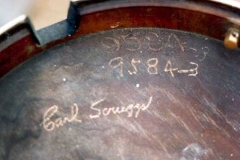 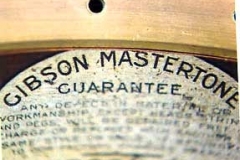 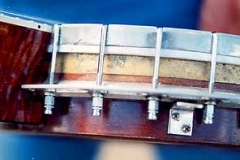 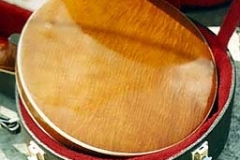 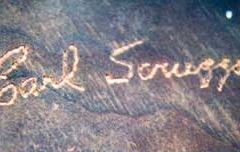 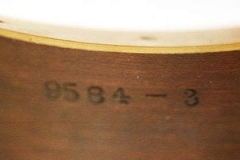 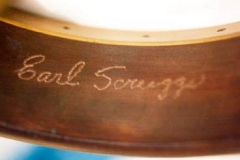 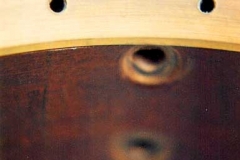 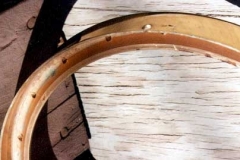 In the world of prewar Gibson banjos, there is no model more legendary than the original five-string Granada with one-piece flange and flathead tone ring.  Fewer than twenty of these banjos were produced, making them many times rarer than Martin’s famed prewar D-45 guitars.  The mystique surrounding this handful of instruments has been enhanced by their association with players such as Earl Scruggs and Sonny Osborne, and the 1930 Granada pictured here is the very one used by Earl Scruggs as his primary banjo from 1949 until his death on March 28, 2012.

Used by Scruggs on virtually every recording done with Lester Flatt and the Foggy Mountain Boys as well as his later performances and recordings with the Earl Scruggs Revue and into the twenty-first century, RB-Granada #9584-3 (see Gibson banjo serial numbers vs. factory order numbers) is easily the most famous Gibson banjo ever made.  This Granada had already had a distinguished series of owners before it came into Scruggs’ hands; it was previously owned by influential banjoists Fisher Hendley and Snuffy Jenkins before being acquired by Don Reno.  Reno traded the Granada to Scruggs for the RB-75 Scruggs had obtained from Haze Hall, including a Martin D-18 guitar in the trade because the Granada was in poor condition.  The gold plating had been damaged by a cake of fiddle rosin left in the case, and shortly after acquiring the banjo Scruggs sent it back to Gibson where it was refitted with nickel-plated hardware and a new fingerboard with bowtie inlays.

For some time there has been debate among prewar Gibson banjo enthusiasts as to the exact chronology of the repair work performed by Gibson on #9584-3.  While the exact date that Scruggs returned the banjo to Gibson remains unknown (although it is believed to have been in late 1949 or early 1950), new research in Gibson’s original shipping ledgers reveals that the banjo was shipped back to Scruggs from the Gibson factory on March 6, 1951.  The shipping ledger entry shown above describes the banjo simply as an “RB”, with no model designation given; it is likely that in 1951, Gibson’s shipping clerk simply did not know one prewar banjo from another.  The ledger entry also indicates that the banjo was returned in a plush-lined #522 case by Geib and Schaefer.

The discography of early Flatt and Scruggs recording sessions shows that after Scruggs used #9584-3 on the December 11, 1949 session in Cincinnati, Ohio which yielded the original recording of Foggy Mountain Breakdown, the next time the band entered the studio was for the marathon “hurricane session” on October 20, 1950 in Tampa, Florida.  The Granada would have been in Kalamazoo for repair by this time, so at this session which produced such classic tracks as “Roll in My Sweet Baby’s Arms”, “Farewell Blues”, “Take Me in a Lifeboat”, and “Salty Dog Blues”, Scruggs would have used the RB-3 which has been documented by prewar banjo scholar Jim Mills as his “fill-in” banjo during this time.  The October 20, 1950 session was the band’s last session for the Mercury label; they began recording for Columbia the following month on November 21, 1950 in Nashville, Tennessee.  At this six-song session which yielded “Come Back Darling”, “I’m Head Over Heels in Love”, “I’m Waiting to Hear You Call Me Darling”, “The Old Home Town”, “I’ll Stay Around”, and “We Can’t Be Darlings Anymore”, Scruggs would have again used the RB-3.  It would be six months before Flatt and Scruggs returned to the studio in Nashville on May 9, 1951, by which time #9584-3 had been back with Scruggs for approximately two months.  The May 9, 1951 session featured the Granada on “Somehow Tonight”, “Don’t Get Above Your Raising”, “He Took Your Place”, and “I’ve Lost You”.

The original neck of #9584-3, thinned down by Gibson at Scruggs’ request, warped and was replaced with a mahogany neck made my J.W. Gower in the late 1950s; a curly maple neck with a smaller peghead, made by Jim Faulker, was installed on the banjo in the early 1970s.  The photographs above were made when the banjo was returned to Gibson for restoration in 1988–an as-per-original curly maple neck was installed and the resonator, which had been refinished an amber color, was returned to its original sunburst finish.  The rim, tone ring, and resonator remain original.