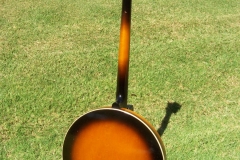 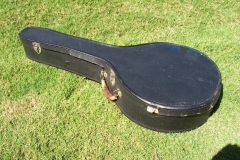 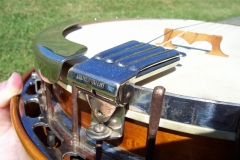 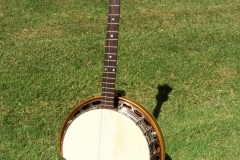 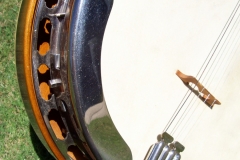 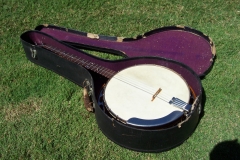 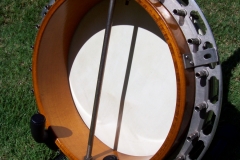 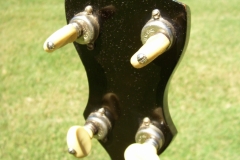 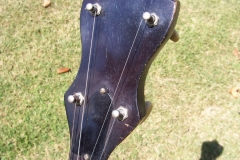 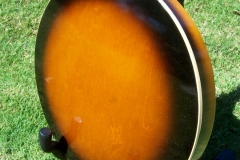 This banjo conforms for the most part to standard catalog specifications for style 00, with maple neck and resonator, sunburst finish on the neck and back and sides of the resonator, binding on the back edge of the resonator only, nickel-plated hardware, one-piece pot metal flange, dot inlays in an unbound Brazilian rosewood fingerboard, and two-tab Grover tuners.  The peghead shape is unique to style 00, and the Gibson logo is silkscreened in white rather than being inlaid in mother of pearl.  The rim is 1/2″ thick below the flange, as is the case with most style 00 banjos, and there is no tone ring or brass hoop but only a bead turned in the top of the rim to serve as a bearing for the head.

While style 00 banjos typically featured an inexpensive tailpiece identified in Gibson catalogs as the “Grover first model”, the tailpiece on this example is the Grover “clamshell” design normally found only on Gibson’s higher-end Mastertone models.

The original owner of this TB-00 was Anthony DiSabatino, Sr. (November 2, 1925–June 5, 2006).  Mr. DiSabatino’s son tells us that his father was “the son of an immigrant Italian master stone mason who joined the Navy in World War II and became a gunner. He just died two years ago at the age of 81. He was quite a guy and the line at his viewing was very long.  I wrote in his obituary that he was one of God’s better efforts. . . he played this banjo in the Wilmington (Delaware) High School Red Devil Marching Band.  He met and married his wife, an Irish beauty named Mary Doyle, in Ocean City, New Jersey following his return to the United States after World War II. He had four children and was a very successful general contractor.  He never forgot how to play that banjo and would play for us kids if we brought it down from the attic–as we did every few years.  I have lots of his old sheet music too, seems he was copying and perhaps writing a few songs–old, old tunes from the thirties such as ‘My Bonnie Lies Over the Ocean’ and ‘When Father Was A Boy’.  I guess it was just a typical boy learning to play a musical instrument–but he stuck with it and was proud that he played in the school band.”