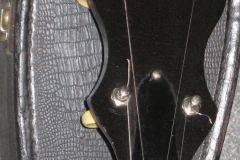 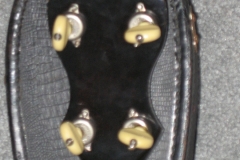 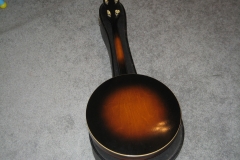 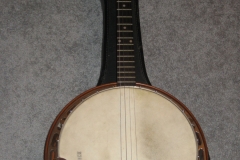 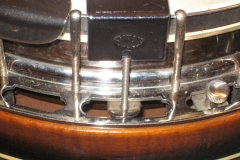 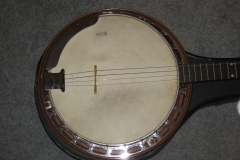 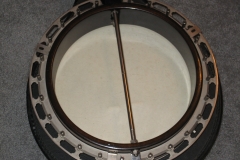 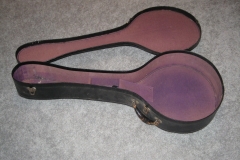 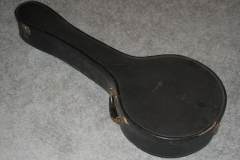 This banjo conforms for the most part to standard catalog specifications for style 00, with maple neck and resonator, sunburst finish on the neck and back and sides of the resonator, binding on the back edge of the resonator only, nickel-plated hardware, one-piece pot metal flange, dot inlays in an unbound Brazilian rosewood fingerboard, and two-tab Grover tuners.  The peghead shape is unique to style 00, and the Gibson logo is silkscreened in white rather than being inlaid in mother of pearl.  The rim is 1/2″ thick below the flange, as is the case with most style 00 banjos, and there is no tone ring or brass hoop but only a bead turned in the top of the rim to serve as a bearing for the head.  The Elton tailpiece is a replacement for the original, which would most likely have been a Grover “first model”.  As is typical for style 00 banjos, there is no factory order number or serial number.

The original owner of this TB-00 was Dick Hysell, born in 1922 in Elyria, Ohio.  He was given the banjo by his parents around 1938.  Mr. Hysell graduated from Elyria High School in 1940 and joined the Navy; he was killed in the attack on Pearl Harbor on December 7, 1941.

Photos courtesy of the family of Dick Hysell.