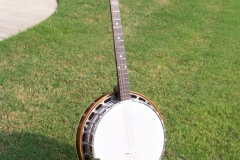 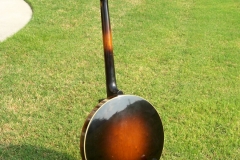 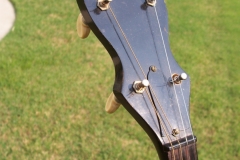 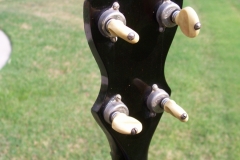 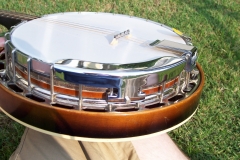 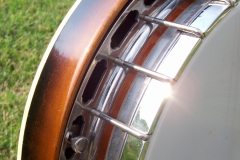 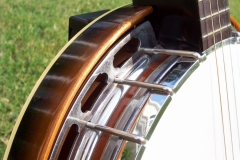 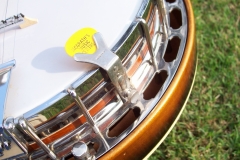 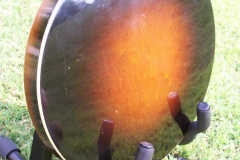 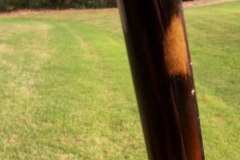 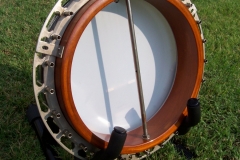 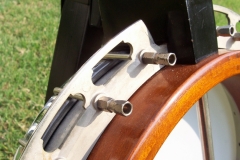 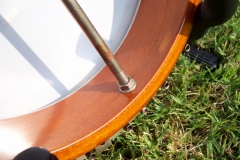 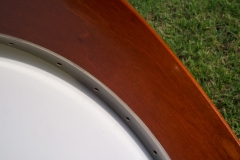 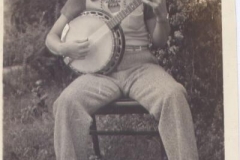 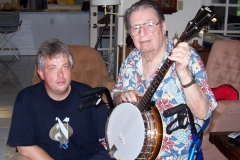 Style 00 was the least expensive banjo model produced by Gibson in the 1930s, with a list price of $30.  During the Great Depression, the no-frills 00 made the Gibson name accessible to many budget-minded musicians, and the model remained in the Gibson lineup through the early 1940s.

The standard components for style 00 reflected its economy price; the rim was only 1/2″ thick and lacked even the small brass hoop of Gibson’s other non-Mastertone models, having only a bead turned in the top of the rim for the head to bear on.  The tension hoop was thinner than those used on other Gibson models and used flat hooks.

In keeping with Gibson’s “consistent inconsistency”, however, a small number of style 00 banjos were produced with the full-thickness rim used on the more expensive Gibson models.  This is one such example, bought new in New York City in the 1930s by Jack Rice, then of Ridgefield, New Jersey, and played by him until June 2007 when I acquired it from him at his home in south Florida.  I’ll let Mr. Rice tell the story of how he came to spend most of his life with this banjo:

“This is a strange story.   I was delivering newspapers as a boy when I spotted a pot-bellied mandolin in a garbage can.  I was always interested in any kind of musical instrument, so I knocked on the door of the house and asked if I could have it.  As luck would have it, a very close boy friend of mine was taking banjo lessons, unknown to me. He advised me to tune it like a tenor banjo (8 strings).  Then I got hold of a Mel Bay instruction book to start.  I later bought a used open-backed banjo, I don’t remember where. It cost $5.00  It was awful to play!  It was so hard to press the strings that it wore my fingers through. So my mother took me to the musical instrument district in NYC.  We visited several stores until we spotted this one.   I don’t remember the name of the store. What attracted us was the beautiful resonator and the price.  I think I paid $27.50.   I loved the sound and the ease of pressing the strings. We drove home to North Jersey on ‘cloud nine’. . . I’ve had other banjos and still have a few. . . but this Gibson has the best tone of all. . . I can’t believe the condition it’s in after 72 years.  I take good care of everything I own.  I’m reluctant to give it up after all these years, but I’m 86 and cannot play it anymore because my right thumb and index finger are numb as a result of a recent fall.  I can’t think of a better final resting place than your web site.”

Aside from the thicker rim, this banjo conforms to standard specifications for style 00 with a one-piece flange, maple neck and resonator with sunburst finish (although the shading is more nicely done on this example than on most style 00 banjos), dot inlays in the unbound rosewood fingerboard, and a white silkscreened Gibson logo on the peghead.  The tailpiece has been replaced and a First Quality flathead tone ring was installed by Bill Sullivan in 1986.

After fifteen years of avidly studying prewar Gibson banjos, I had never had any contact with the original owner of one of these instruments until I heard from Mr. Rice.  I’m honored that he chose to pass this banjo along to me.

This banjo made a great-sounding five-string with a reproduction neck by Wyatt Fawley.