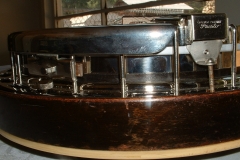 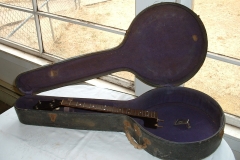 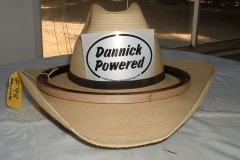 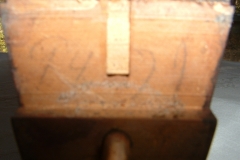 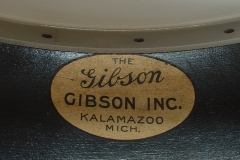 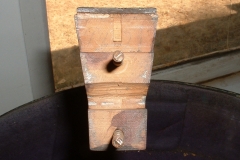 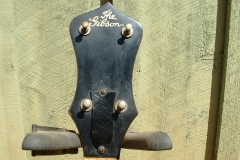 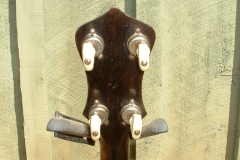 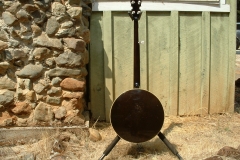 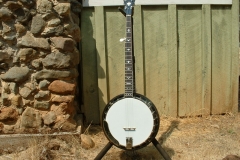 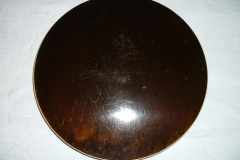 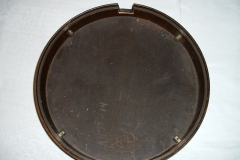 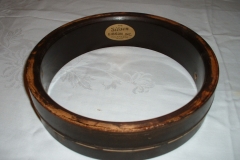 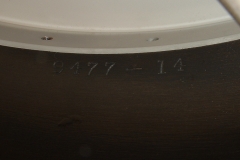 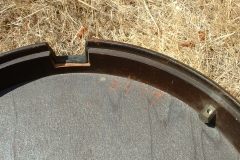 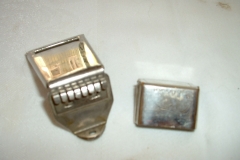 When style 1 made the transition from the earlier “bracket-shoe” design  to the one-piece flange circa 1929, some examples were made with the new rim construction while retaining most of the cosmetic appointments of the earlier 1920s design.  #9477-14 (see Gibson banjo serial numbers vs. factory order numbers) is one of these transitional models and was rescued from a grim fate by its current owner:

“#9477 -14 was first bought in Oklahoma in the 1930s new. The owner then moved to the Oregon coast in the 1950s. He passed away, leaving his son this old Gibson TB-1.  This was the only thing the father willed to his son. The son was upset about this and did not like his father apparently. He put the TB-1 in the barn where it stayed for about forty years, out exposed to the elements. In 2000 he owed a man money for services and the man took a few instruments and tools for partial payment. When the son saw the old tenor he said if he would have known it was there he would have burned it. Talk about a barn burner.

The new owner then kept this old tenor in his closet for five years. He was going to a party and thought it would be funny to bring and play the old tenor. He had no idea of its value and actually caused damage and lost parts. It was at this party when finally someone recognized what it was and told him it might be worth something. That’s how it ended up on eBay. I was only able to acquire it because it was beat up and neglected. It was also right around the corner from me in Oregon, so I took the chance and won the bid. Let me tell you, it looked a lot better on eBay than in person. It needed a lot of help. . .

This banjo now has been converted to a five-string with the help of Robin Smith of Heartland Banjos. It has a custom five-string neck with Gibson “fleur-de-lis” peghead and fingerboard inlay. A Grover Patent Presto tailpiece punched by Jerry Keys and an original two-piece prewar armrest were also used. . . Charlie Cushman did the professional setup.  These guys are awesome at what they do and I highly recommend them for your quests and projects. Thanks to everyone who helped me bring this banjo back to life.  #9477-14 is named ‘Pretty Red’.”

Unlike most earlier TB-1s, this banjo’s fingerboard has double position dots inlaid at the seventh fret as well as the twelfth; the old-style “The Gibson” peghead logo is silkscreened.  The dark-finished maple resonator is bound on the back edge only.  The rim was cut for installation of a Dannick tone ring and the banjo has been equipped with an original 1920s two-piece Gibson armrest.  When found by its current owner the banjo had no armrest, which is most likely the way it left the factory.  Most style 1 banjos of the 1930s had only three resonator screws, but some were produced with four screws and on these the added screw is typically positioned symmetrically in relation to the other three, rather than being displaced one bracket to be out of the way of the armrest attachment hardware as was usually done on four-screw models.  This positioning of the fourth resonator screw apparently led Gibson to leave off the armrest on a number of these style 1 banjos.