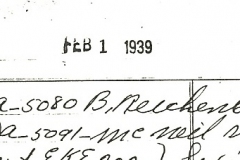 The style 1 of the 1930s was a non-Mastertone model and therefore had no true tone ring–only a small-diameter brass hoop on top of the rim.  It did, however, feature the same pot metal one-piece flange and three-ply maple rim as the Mastertones of the same period.  Style 1 had nickel-plated hardware and a dark-finished maple neck and resonator, with white binding on the neck and both edges of the resonator.  Even though the Mastertone models had by this time gone to the double-cut peghead shape, the fiddle-shaped peghead was retained on style 1, with a minor modification–the two small indentations normally found under the fourth- and first-string tuners were absent.  The rosewood fingerboard was inlaid with a fleur-de-lis inlay pattern until circa 1937, when the fingerboard inlay was changed to the simple dot pattern seen here, although the “inverted bud” peghead inlay remained.

As is common with banjos from the late 1930s, this example has a true serial number stamped on the back of the peghead; the letter prefix “D” indicates a production date of 1938 (see Gibson banjo serial numbers vs. factory order numbers).  #DA-5091 was shipped on February 1, 1939 to the McNeil School of Music in its #511 Geib and Schaefer case; another TB-1, bearing serial number #DA-5080 and also in a #511 case, was shipped that same day to long-time Gibson teacher/agent Betty Reichenbach.