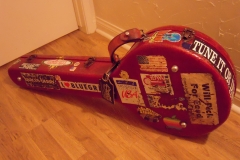 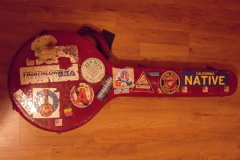 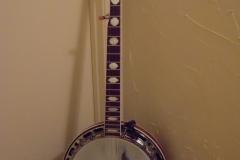 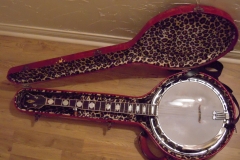 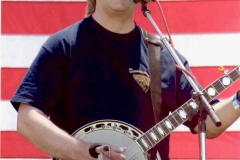 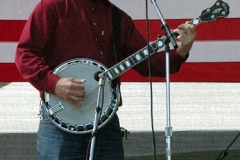 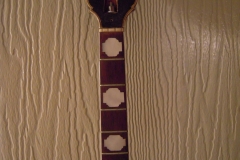 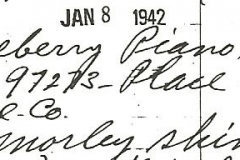 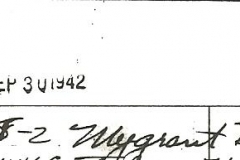 Introduced as the middle of the three new top-tension Mastertone models in 1937, style 12 suffered from the low demand for banjos at the time and from the typical unpopularity of “in-between” models such as the style 4 Mastertone and the style 2 non-Mastertone.  The walnut and chrome plating of style 12 are reminiscent of the earlier style 4, but the new model’s other features identified it, along with the other top-tension models, as “modern” and “startlingly different”, in the words of Gibson’s 1937 catalog.

#918-2 (see Gibson banjo serial numbers vs. factory order numbers) is listed in the Gibson shipping ledger (misidentified as a TB-7) being sent as a repair on September 30, 1942 to Mygrant Band House, a music store in Kokomo, Indiana.  No previous entry exists for this factory order number, but on January 8, 1942 Gibson had shipped a TB-12 to a Morley Skinner without listing any factory order number.  Gibson historian and genealogist Joe Spann, author of Spann’s Guide to Gibson 1902-1941, has determined that Morley Skinner lived in Kokomo, Indiana and given the low production totals for style 12 banjos, his banjo is certain to have been #918-2 and, incidentally, the last style 12 banjo produced by Gibson until the model was reissued in the 1990s.  Joe tells us that Morley Skinner was born October 18, 1898 in Madison, Michigan and died in Kokomo, Indiana in September 1965.  He was listed in the 1920 census as a laborer in a garage in Adrian, Michigan and in the 1930 census as a fence builder in Toledo, Ohio.

In its current incarnation as a five-string, #918-2 is the main banjo of California banjo virtuoso Bill Knopf.  We’ll let him fill us in on this banjo’s more recent history:

“In 1976 my band was on a road trip to Northern California.  On the way up and back we stopped at Jon Lundberg’s vintage instrument shop in Berkeley.  I played (#918-2) for quite awhile and decided I had to own it.  I returned a week later and purchased it.  I have the original neck as well.  The tuning pegs have amber bakelite knobs.  Jon even put a matching knob on the fifth string tuner.  Seven or eight years ago some of the gears in the pegs were so badly stripped that I replaced them.  The tuners for the Gibson Firebird guitar were a match for the originals, but they have chrome knobs.

Jon had a five-string neck made for it, and it’s a perfect match–just bigger.  Since the tenor neck has a much longer scale than a standard tenor, my banjo fits in the original case–just barely.  The case started to deteriorate a couple of years after I got it, so I stripped it down to the bare wood, covered it in red burlap cloth, and applied many coats of fiberglass resin.  It’s really strong and doubles as a surfboard.

I guess you could describe the condition of my banjo as lovingly extremely well played.  The finish on the back of the neck has been completely worn off.  The resonator and peghead are scarred up, but I have always been advised to keep it in original condition.”

Here’s a great video of Bill putting #918-2 through its paces with Little Rock Getaway.