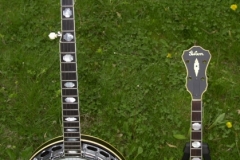 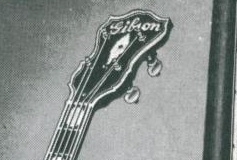 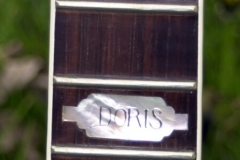 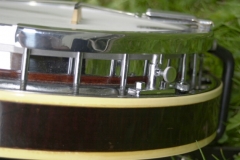 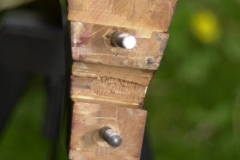 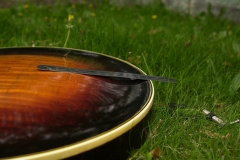 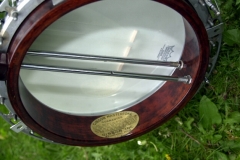 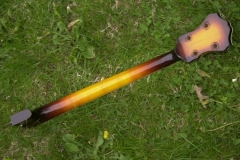 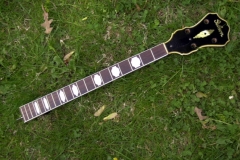 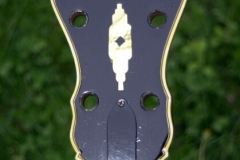 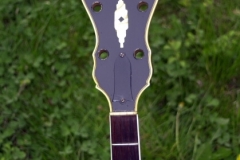 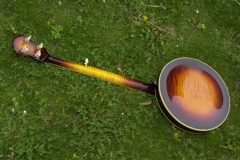 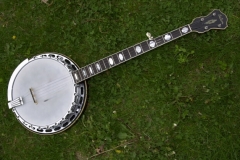 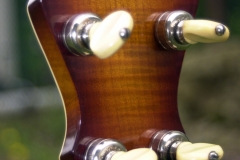 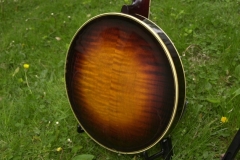 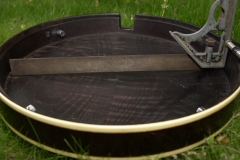 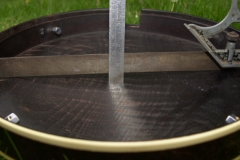 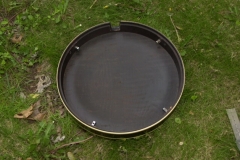 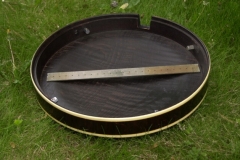 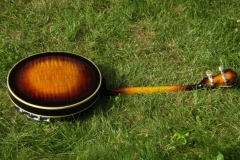 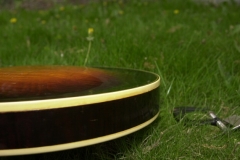 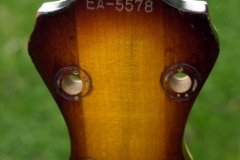 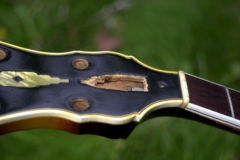 This Mastertone does not conform to standard specifications for any of the three cataloged top-tension styles, but was noted in Gibson’s shipping ledger as a TB-12 when it was shipped on November 13, 1939, presumably for the unidentified “Doris” whose name is engraved in the twelfth-fret inlay.  Non-standard variations among top-tensions seem to be almost as common as fully stock examples, typical of the late prewar and wartime periods in which they were produced.  The pot of #EA-5578 (see Gibson banjo serial numbers vs. factory order numbers) features the top-tension bracket arrangement, one-piece flange, and original flathead tone ring as found on style 7, 12, and 18; the curly maple neck and resonator with sunburst finish are consistent with style 18, but rather than the gold plating and engraving of style 18, this banjo has the chrome-plated, non-engraved hardware of a style 12.  The fingerboard is inlaid with the block design used on styles 12 and 18, but with the inlay starting at the third fret rather than the first.  The central peghead inlay has an extra step and the peghead itself is narrower than the normal top-tension peghead and has points at the top corners instead of being rounded off.  This slightly different peghead design actually matches the catalog illustration seen above more closely than the standard production peghead seen on most top-tension Gibson banjos.  The resonator construction is also unusual; typical top-tension resonators were lathe-turned with a pronounced hump on the outside but left flat on the inside, while this resonator is carved out into a dish shape on the inside.  The serial number is stamped on the back of the peghead of the tenor neck;  #EA-5578 is currently equipped with a reproduction five-string neck by Bill Sullivan.