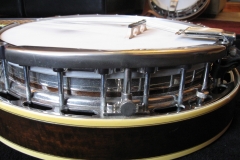 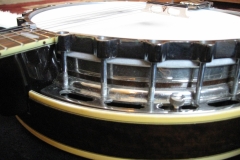 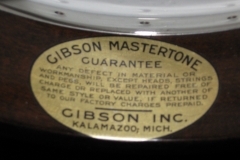 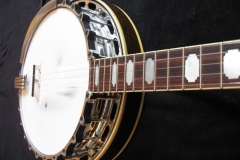 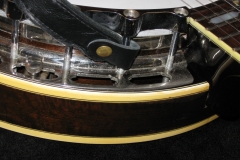 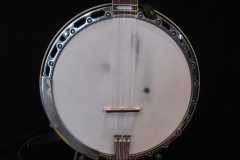 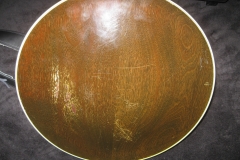 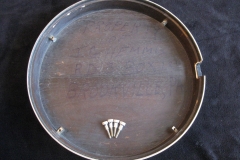 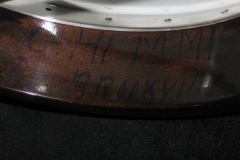 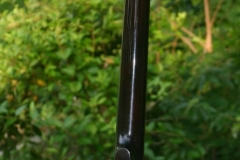 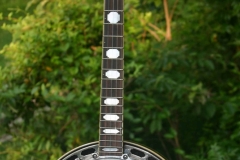 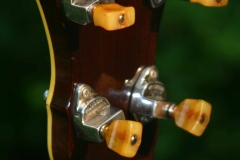 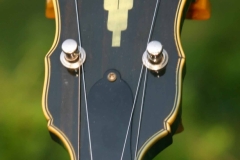 In the late 1930s, Gibson attempted to revive flagging banjo sales with the introduction of the radical new line of top-tension Mastertones, much as they had tried to recapture the dying mandolin market in the mid-1920s with Lloyd Loar’s Master Model series.

The top-tensions were innovative in a number of ways.  The most obvious was their namesake head-tightening design; players no longer had to remove the resonator to make the frequent tension adjustments necessitated by calfskin heads, since the brackets were adjusted from the top of the pot rather than the bottom.  Top-tensions also featured distinctive solid wood resonators which were flat on the inside but carved with a pronounced hump on the back.  Other features of these radical new banjos were an easily adjustable armrest which could quickly be moved out of the way for head adjustment, radiused fingerboards, and bold Art Deco looks with large, geometric inlay patterns and a more guitarlike peghead shape.  For present-day players, one of the most important features of these top-tensions is the fact that they were the only prewar Gibson banjos on which flathead tone rings were standard.

Non-standard variations among top-tensions seem to be almost as common as fully stock examples, typical of the late prewar and wartime periods in which they were produced.  The pot of this banjo features the top-tension bracket arrangement, one-piece flange, and original flathead tone ring as found on style 7, 12, and 18; the walnut resonator with multi-ply binding is consistent with style 12, but is finished in a uniform brown typical of style 7.  The mixture of style 7 and style 12 characteristics extends to the plating of the metal parts, with nickel plating (typical of style 7) on the tension hoop, brackets, armrest, and tailpiece, and chrome (typical of style 12) on the tone ring and flange.

This example had a number stamped only on the back of the peghead and since the tenor neck is no longer with the banjo, the serial number has unfortunately been lost.  The inside of the resonator and rim bear the name and address of original owner J.G. Hemmis, who lived in Brookville, Pennsylvania.  An examination of Gibson’s shipping ledger indicates that this banjo was likely #EA-5554 (see Gibson banjo serial numbers vs. factory order numbers), shipped as a TB-12 to Miller’s Music Company on October 30, 1939.  The pot is completely original and the five-string conversion neck was made by Dick Powell in the early 1980s.  The original Kluson DeLuxe amber-button tuners are now installed on the conversion neck.