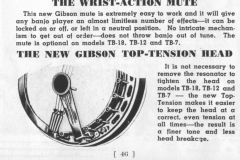 Faced with declining banjo sales as the 1930s progressed, Gibson made the decision in 1937 to radically overhaul its banjo line.  All existing Mastertone styles were discontinued with the exception of style 3, which underwent some minor changes and was renamed style 75.   In their place, Gibson introduced three new Mastertone models–banjos which, in the words of the 1937 catalog, fit in with “modern ideas of tone, design and construction” and were “startlingly different”.

These new banjos came to be known as the top-tensions, since one of their most distinctive features was the tension hoop and bracket arrangement which allowed the head tension to be adjusted without removing the resonator.  The top-tensions were also different in a number of other ways:   They were the first Gibson banjos to feature a flathead tone ring as standard equipment regardless of neck configuration, they sported a bold Art Deco look with geometric inlay designs and large headstocks, the resonators were made of solid, rather than laminated, wood and were carved with a pronounced hump on the back, the armrests were adjusted with a thumbscrew, and the fingerboards were radiused to provide, according to Gibson, “speed and smooth-flowing playing ease that will thrill you”.

The most expensive top-tension model was style 18, which could be considered the top-tension equivalent of the Granada.  Gibson’s Catalog AA of 1939 described the features: “Made of beautifully figured curly maple–finished in a hand rubbed Cremona brown with golden sunburst on resonator and neck–fingerboard made of rosewood with genuine pearl inlays in fingerboard and peghead–white-black-white ivoroid binding around top and bottom of resonator, fingerboard, and peghead–heavily gold plated and engraved metal parts–4 to 1 gear pegs with pearl buttons.”  #1394-2 (see Gibson banjo serial numbers vs. factory order numbers) was originally a tenor but is now set up with an old reproduction five-string neck.  This example also features a rare wrist-action mute, available as optional equipment on the top-tension models.  Gibson’s 1939 catalog promised that this new mute would “give any banjo player an almost limitless number of effects”; by alternately muting and unmuting the strings while playing, a player could approximate the sound created by a modern-day phase-shifter pedal.  Check out this video of owner Buzz Matheson demonstrating its use!

The shipping history of #1394-2, gleaned by researcher Joe Spann from Gibson’s original shipping ledgers, paints a stark picture of just how low the demand was for tenor banjos, and especially high-end tenor banjos, by the late 1930s.  Joe tells us that #1394-2 “was checked out to Gibson salesman Robert Anderson as a sample on 20 July 1937 but did not sell and was returned to stock.  It was then modified “with mute” and shipped to Smith Phillips Music on 10 November 1937.  It did not sell and was returned to Gibson.  It was sent a third time on 22 December 1937 to George Rose Music.  Two months later it was returned to Gibson for repairs and shipped back to George Rose Music on 14 February 1938.  George Rose Music evidently did not approve of the repair or could not sell the banjo and it was returned to Gibson.  Five months later on 27 July 1938 it was shipped to Kenny Music Company of Huntington, West Virginia as a ‘TB-Gold’ where it evidently sold.”