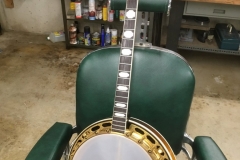 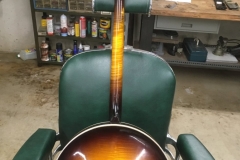 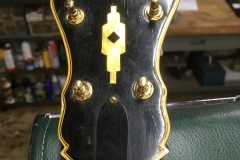 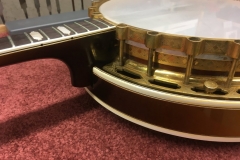 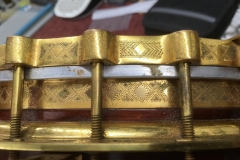 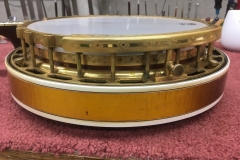 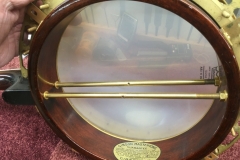 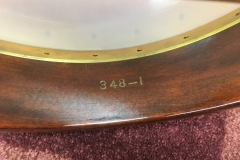 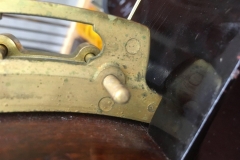 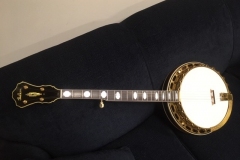 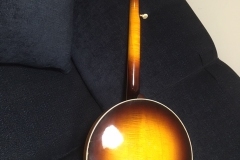 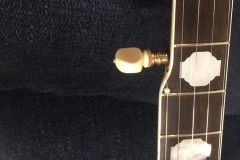 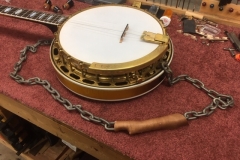 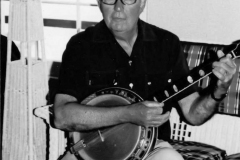 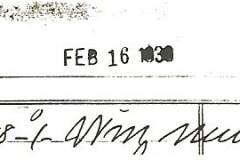 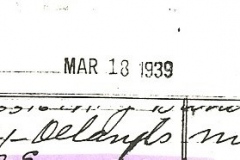 Gibson described the TB-18 as “the headliner of all modern tenor banjos” in its Catalog BB of 1942.  “Modern” seems to have been the operative word in Gibson’s conception of their new line of top-tension banjos, introduced in 1937.  Art Deco styling, flathead tone rings, radiused fingerboards, and solid carved resonator backs, along with the new and more convenient head-tensioning system, were clearly meant to help the banjo shed its old-fashioned image and regain popularity in a popular music world that was increasingly dominated by the guitar.  As the top model in Gibson’s new banjo line, style 18 was the only gold-plated Mastertone in production from the late 1930s until banjo production was suspended during World War II.

#348-1 (see Gibson banjo serial numbers vs. factory order numbers) was shipped on February 16, 1939 to William Nutting, proprietor of Nutting, Inc., identified by researcher Joe Spann as having been located in Nashua, New Hampshire; the banjo was evidently returned unsold and shipped a second time on March 18, 1939 to Deland’s Music Store (location unknown). The longtime owner of #348-1 was Lloyd Dunn, a native of Brooklyn who joined Capitol Records as vice president of merchandising and sales in 1950, later serving as vice president of artists and repertory and then as president of Capitol Records International Corporation. In 1957, Mr. Dunn founded the Academy of Recording Arts and Sciences (now The Recording Academy), presenter of the Grammy Awards, with four other record executives. His autobiography, On the Flip Side, was published in 1975; Mr. Dunn died on March 8, 1991 at the age of 84 in Encino, California.

#348-1 is now equipped with a reproduction five-string neck by Chris Warner.