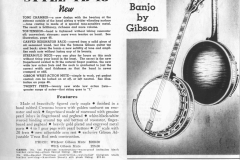 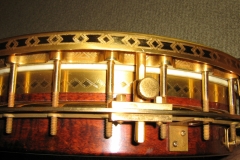 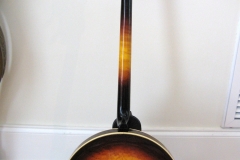 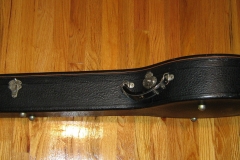 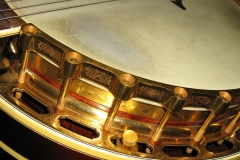 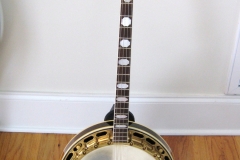 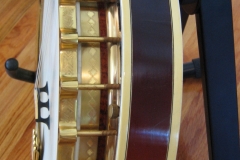 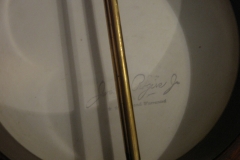 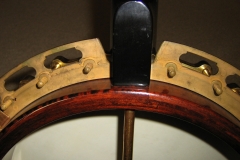 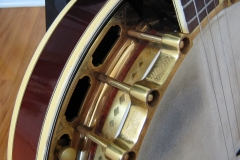 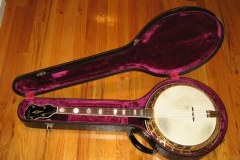 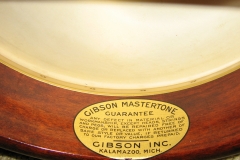 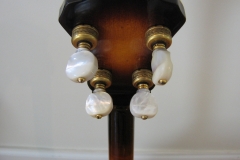 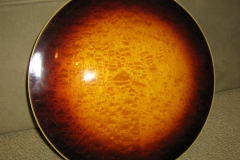 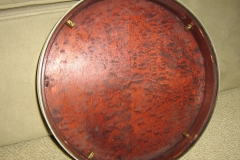 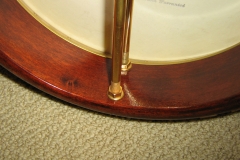 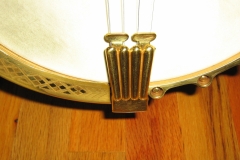 Faced with declining banjo sales as the 1930s progressed, Gibson made the decision in 1937 to radically overhaul its banjo line.  All existing Mastertone styles were discontinued with the exception of style 3, which was lowered in price from $100 to $75 and renamed style 75.   In their place, Gibson introduced three new Mastertone models–banjos which, in the words of the 1937 catalog, fit in with “modern ideas of tone, design and construction” and were “startlingly different”.

These new banjos came to be known as the top-tensions, since one of their most distinctive features was the tension hoop and bracket arrangement which allowed the head tension to be adjusted without removing the resonator.  The top-tensions were also different in a number of other ways:   They were the first Gibson banjos to feature a flathead tone ring as standard equipment, they sported a bold Art Deco look with geometric inlay designs and large headstocks, the resonator backs were lathe-turned from solid wood with a pronounced hump on the back rather than being formed of bent laminates, the armrests were adjusted with a thumbscrew, and the fingerboards were radiused to provide, according to Gibson, “speed and smooth-flowing playing ease that will thrill you”.

The most expensive top-tension model was style 18, which could be considered the top-tension equivalent of the Granada.  Although the catalog specified curly maple, the resonator of this example is birdseye maple.  The resonator and neck are sunburst finished, the fingerboard is Brazilian rosewood with stairstep block inlays, and the peghead is bound and inlaid with the thick Gibson script logo.  All hardware remains original, including the clamshell tailpiece and the engraved Grover tuners with mother-of-pearl buttons.  There is no serial number or factor order number, unusual for a Mastertone but not unheard of in Gibson’s late prewar and wartime production.  This banjo remains in pristine original condition with its original plush-lined red-line hardshell case.