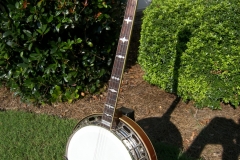 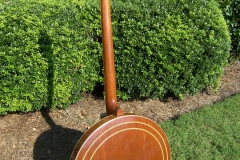 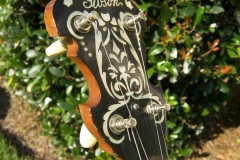 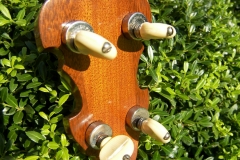 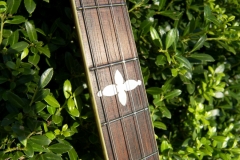 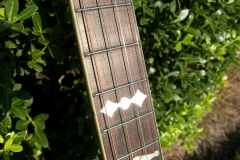 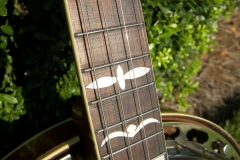 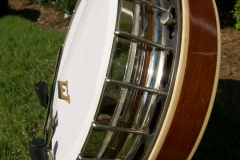 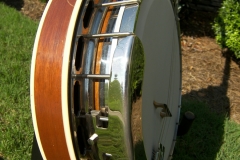 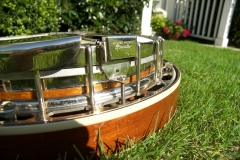 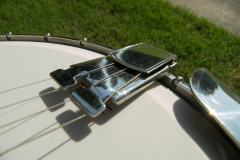 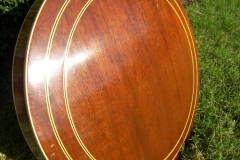 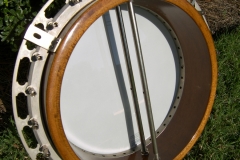 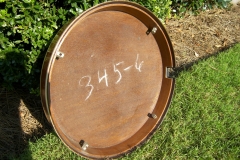 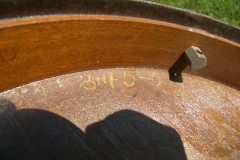 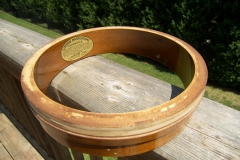 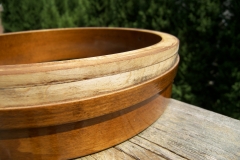 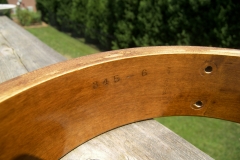 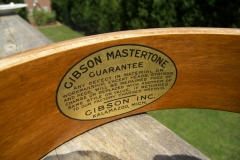 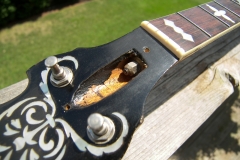 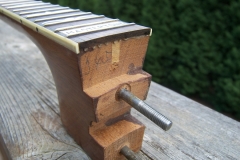 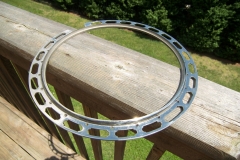 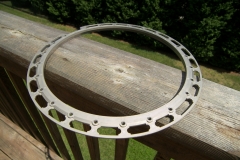 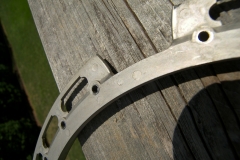 Style 3 was the least expensive model in Gibson’s Mastertone line.   It was introduced in 1925 and remained in production through 1937, when its price was lowered from $100 to $75 and it was renamed style 75.  #345-6 remains in completely original, excellent condition and for the most part conforms to standard specifications for a style 3 tenor banjo of the mid-1930s with a one-piece pot-metal flange, forty-hole archtop tone ring, Presto tailpiece, mahogany neck and resonator, and double-cut peghead shape.  While the fingerboard inlays are the standard “leaves and bows” pattern used on style 3 banjos of the period, the peghead inlay pattern is that used on the ornate Bella Voce banjos of the late 1920s.  TB-3s with this fancy peghead inlay are known from lots #271, #345 and #347, indicating that Gibson chose these runs of style 3 banjos to use up surplus peghead overlays that had been pre-inlaid for the discontinued Bella Voce.

Close examination of the rim on this example reveals a wooden cap glued to the top of the rim, indicating that the rim of #345-6 had originally been made up for a flathead ring and was then altered at the factory to accept an archtop ring.  A veneer was added to the inside of the rim so the alteration is only visible underneath the tone ring.

The original owner of #345-6 (see Gibson banjo serial numbers vs. factory order numbers) was Helen May Knighton (May 27, 1918–February 19, 2006) of York, Pennsylvania.  Miss Knighton played both tenor banjo and mandocello and was active in two highly-acclaimed fretted instrument ensembles in the York area in the 1930s:  Warren Dean’s Banjo, Mandolin and Guitar Orchestra and the Karl Alex Smyser Banjo Band.  Dean and Smyser were both noted performers, composers, and teachers and were regularly pictured as endorsing artists in Gibson catalogs of the period.