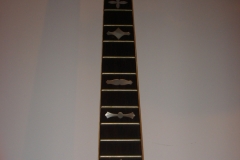 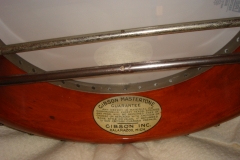 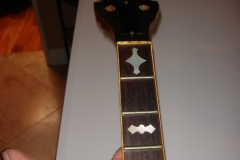 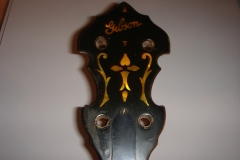 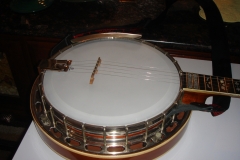 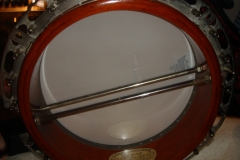 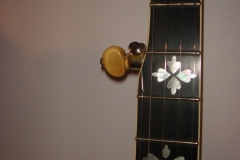 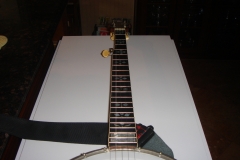 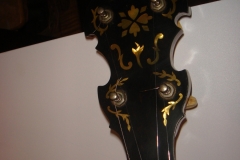 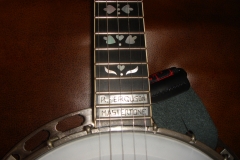 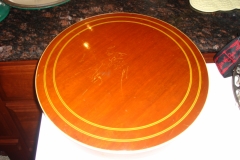 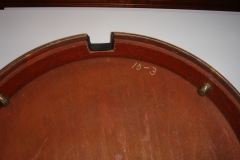 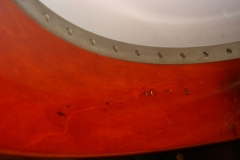 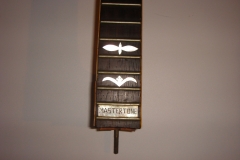 In 1937, after twelve years as the lowest-price model in Gibson’s Mastertone line, style 3 was lowered in price from $100 to $75 and renamed style 75; the first banjo to leave the factory as a style 75 was TB-75 #934-4, shipped on August 10th, 1937.  The changeover from style 3 to style 75 was just a few months away when #10-3 was shipped on May 12th, 1937.  This example is a typical mid-1930s TB-3 in most respects, with mahogany neck, mahogany resonator with white binding on both edges and two concentric circles of black and white purfling on the back, a one-piece flange, forty-hole archtop tone ring, Presto tailpiece, Grover tuners, and a double-cut peghead and Brazilian rosewood fingerboard inlaid with the leaves and bows pattern.  The first-fret inlay is turned ninety degrees from its normal position, a variation frequently seen on later banjos shipped under the style 75 designation.  #10-3 (see Gibson banjo serial numbers vs. factory order numbers) is currently equipped with an older five-string conversion neck by Ron Ferguson.