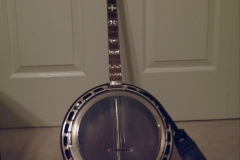 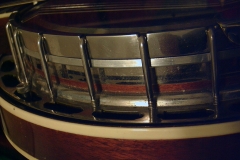 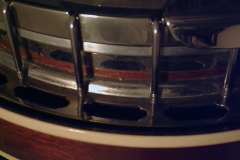 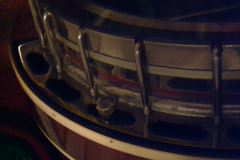 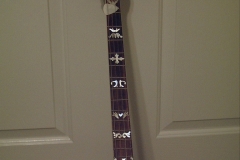 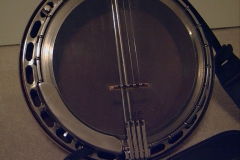 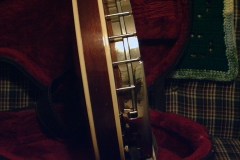 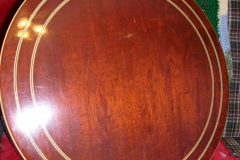 Style 3 was the least expensive model in Gibson’s Mastertone line.   It was introduced in 1925 and remained in production through 1937, when its price was lowered from $100 to $75 and it was renamed style 75.  While the style 3 of the 1920s had a two-piece flange with maple neck and resonator, a fiddle-shaped peghead and the diamonds and squares inlay pattern, the style changed in 1929 to the configuration seen here.  The flange is one-piece; the wood is mahogany with two white/black/white purfling rings on the back of the resonator, and the peghead shape is double-cut.  There is single white binding on the neck and on both edges of the resonator.  The tone ring is a forty-hole archtop; this example’s tailpiece and case are non-original.

While most style 3 banjos of this period feature the leaves and bows inlay pattern, they are also occasionally seen with flying eagle inlays on the fingerboard as on this rare example.

#25-23 (see Gibson banjo serial numbers vs. factory order numbers) was owned for many years by William “Bill” Eddy, who bought it in 1975 from the Bob George Music Store in Kansas City, Missouri for $900.  Mr. Eddy played the banjo for twenty years with the Kansas City Banjo Band before moving to Idaho, where he continued to play in churches, nursing homes, and once a week at Godfather’s Pizza.  Mr. Eddy passed away in 2008 and the banjo continues to be played and enjoyed by his son Bob and his grandson Brett.