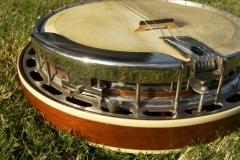 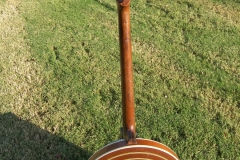 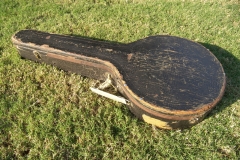 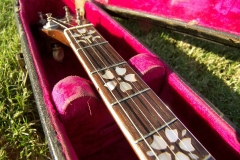 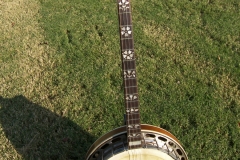 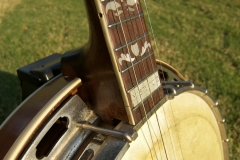 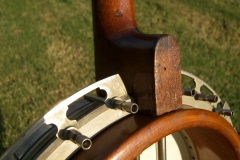 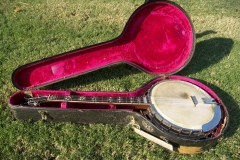 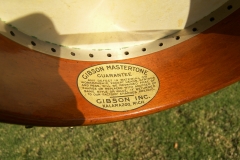 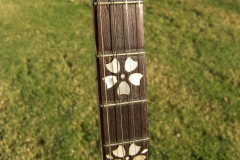 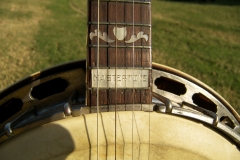 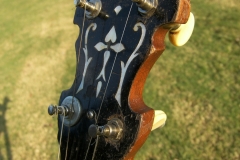 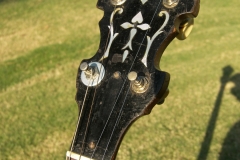 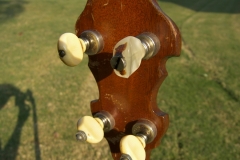 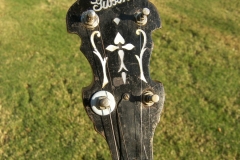 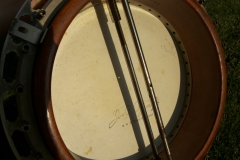 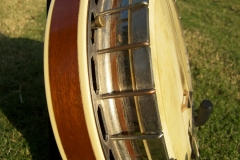 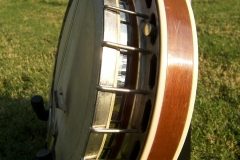 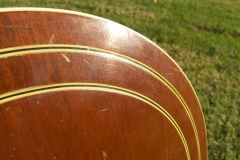 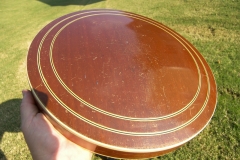 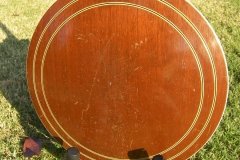 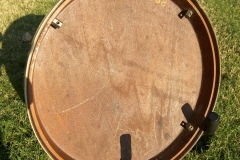 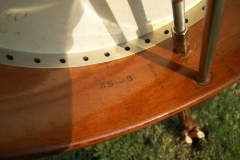 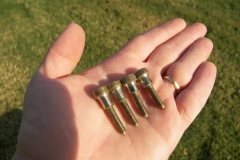 Style 3 was the least expensive model in Gibson’s prewar Mastertone line; it was introduced in 1925 and remained in production through 1937, when its price was lowered from $100 to $75 and it was renamed style 75.  This TB-3 has the factory order #25-8 (see Gibson banjo serial numbers vs. factory order numbers) inside the rim, which dates to 1931.  The resonator, however, bears the number #9488-42, which would date to 1929.  It cannot be determined whether the banjo was originally shipped from the factory in this configuration or whether the original resonator was damaged and replaced by Gibson with an older resonator remaining in stock.  In either case, prewar Gibson banjos with mismatched numbers are not at all uncommon and this instrument’s specifications are entirely consistent for a style 3 banjo of the period with the exception of the Bella Voce fingerboard inlay pattern.  The highly ornate Bella Voce model of the late 1920s was only in production a short time, and surplus Bella Voce components are consequently seen from time to time on later Gibson banjos.  A number of TB-3s are known with the standard style 3 leaves and bows inlay pattern on the fingerboard and the Bella Voce pattern on the fingerboard (see TB-3 Mastertone #345-6, the “Helen Knighton”), but #25-8 is the only example seen to date with the opposite configuration.  One of this banjo’s “littermates”, TB-3 Mastertone #25-23, features leaves and bows on the peghead and the flying eagle pattern on the fingerboard, suggesting that lot #25 may have been one in which Gibson made a conscious decision to use up various leftover inlay patterns.

#25-8 shows signs of heavy use over the years, including missing binding on the treble side of the fingerboard, a repaired heel crack, one replaced tuner, and one crack in the pot metal flange, but its structural integrity and functionality remain uncompromised and the banjo is ready for many more decades of music-making.  The instrument remains in its original plush-lined Geib and Schaefer #509 case.  #25-8 was owned for many years by Richard A. Booth (November 12, 1914–February 14, 2009), a native of Nova Scotia who later settled near West Point, New York.