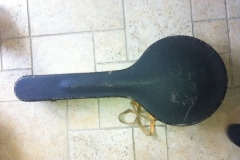 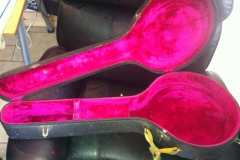 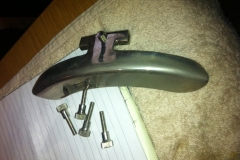 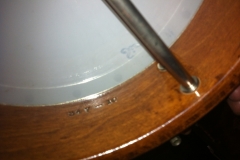 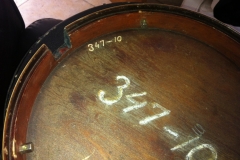 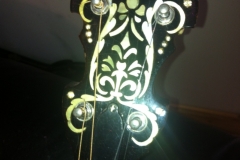 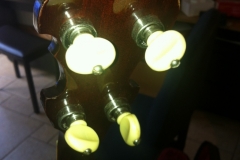 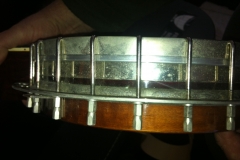 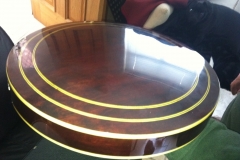 Style 3 was the least expensive model in Gibson’s Mastertone line.   It was introduced in 1925 and remained in production through 1937, when its price was lowered from $100 to $75 and it was renamed style 75.  #347-10 dates to 1934 (see Gibson banjo serial numbers vs. factory order numbers) and is one of a small number of 1930s TB-3s featuring the standard “leaves and bows” inlay pattern on the fingerboard but the much more elaborate peghead inlay pattern used on Gibson’s ornate Bella Voce banjos of the late 1920s.  TB-3s with this fancy peghead inlay are known from lots #271, #345 and #347, indicating that Gibson chose these runs of style 3 banjos to use up surplus peghead overlays that had been pre-inlaid for the discontinued Bella Voce.

A previous owner dressed the peghead up further with a few discreetly-placed rhinestones.  #347-10 has been converted to five-string flathead and currently resides in Ireland.  The tenor neck and resonator have been refinished and the factory order numbers inside the resonator have been rewritten.  The banjo’s current owner relates the rest of the story:

“I got this banjo in Scotland in the early 1980s from an ad I found in an old Exchange and Mart paper that had been used as packing for aircraft parts for a company I worked for at the time.  I was working late and decided to take a chance and ring the number to see if the banjo was still there. It turned out it was still available–the guy said there was a lot of interest in the banjo but there had been a postal strike and he couldn’t send any photos to the people .

I made arrangements to fly from Ireland to Edinburgh to meet him and I bought the banjo in the airport car park, got back on the same plane, and I was back home in three hours.  The banjo is how it was at that time–his friend worked in the paint shop at Rolls Royce and he put the new finish on the banjo.  I was slightly disappointed at the time but was still glad to get it.

I have played this banjo for all this time and had many hours of pleasure from its sound, especially when listening to someone else playing it.  I don’t know where the neck and tone ring came from but they are very good quality.”