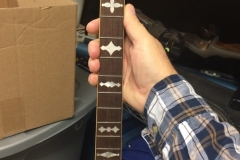 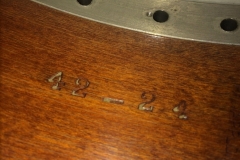 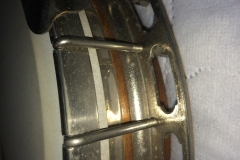 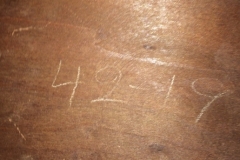 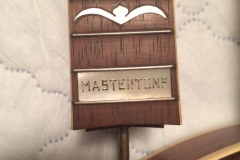 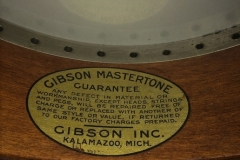 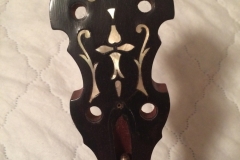 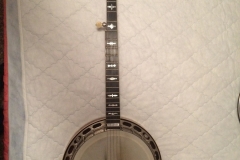 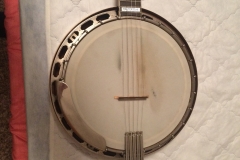 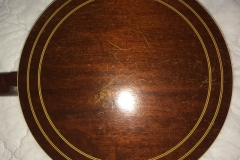 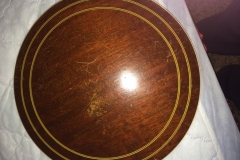 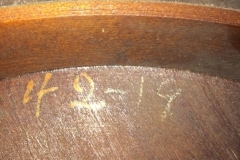 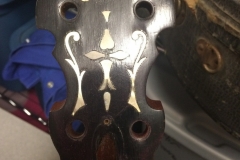 Style 3, the least expensive model in Gibson’s prewar Mastertone line, was revamped in 1929.  The model’s straight-grained maple changed to mahogany, two concentric rings of white/black/white purfling were added to the back of the resonator, the brass tube-and-plate flange was replaced by a one-piece cast metal flange, and the headstock shape and inlay patterns also changed.  #42-24 (see Gibson banjo serial numbers vs. factory order numbers) dates to 1931 and remains in original condition with the exception of a replaced tailpiece.  A five-string conversion neck has been added but no alteration has made to the rim, which retains its original forty-hole raised-head tone ring.

#42-24 bears the factory order number #42-19 written inside the resonator; such mismatched factory order numbers are not uncommon among prewar Gibson banjos and in the majority of cases most likely resulted from simple inattention on the part of the employee doing banjo assembly.  The current owner acquired the banjo in the mid-1980s from the widow of the original owner, who is said to have played the banjo at the Century of Progress International Exposition in Chicago in 1933.