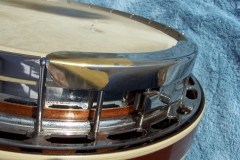 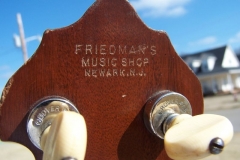 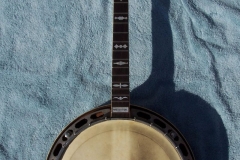 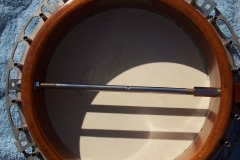 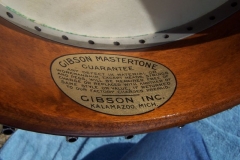 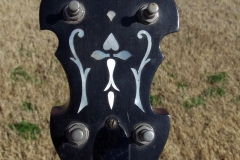 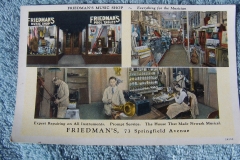 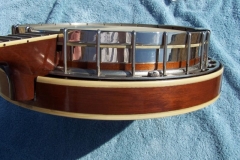 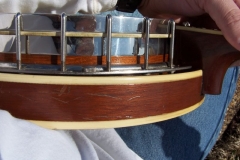 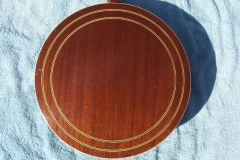 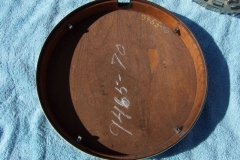 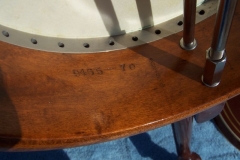 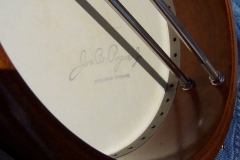 Style 3 was the least expensive model in Gibson’s Mastertone line.   It was introduced in 1925 and remained in production through 1937, when its price was lowered from $100 to $75 and it was renamed style 75.  The style 3 of the 1920s featured dark-stained maple, a two-piece flange, a fiddle-shaped peghead, and diamonds and squares inlays.  In 1929, the specifications changed to those seen here; #9465-70 (see Gibson banjo serial numbers vs. factory order numbers) is from the first known lot of “1930s-style” TB-3s, with mahogany neck, mahogany resonator with white binding on both edges and two concentric circles of black and white purfling on the back, a one-piece flange, forty-hole archtop tone ring, Presto tailpiece, Grover tuners, and a double-cut peghead and Brazilian rosewood fingerboard inlaid with the leaves and bows pattern.

The back of this banjo’s peghead is stamped with the name of the retailer where it was originally sold: Friedman’s Music Shop in Newark, New Jersey.  The banjo is also accompanied by a period postcard from Friedman’s, “The House That Made Newark Musical”.