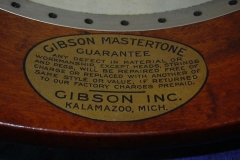 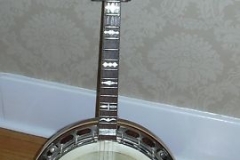 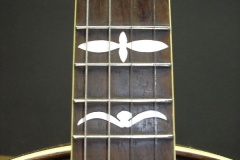 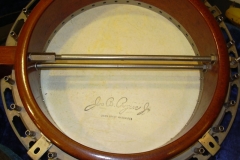 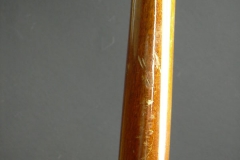 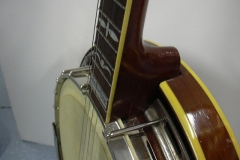 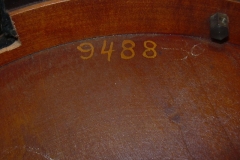 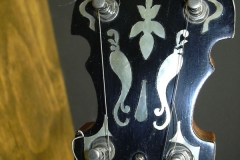 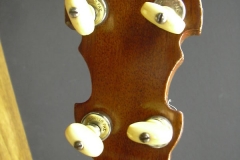 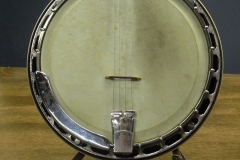 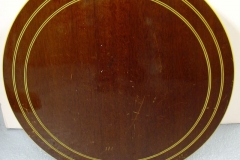 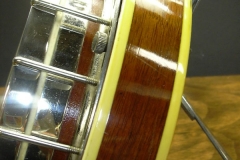 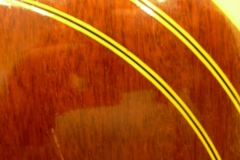 Style 3, the least expensive model in Gibson’s prewar Mastertone line, was revamped in 1929.  The model’s straight-grained maple changed to mahogany, two concentric rings of white/black/white purfling were added to the back of the resonator, the brass tube-and-plate flange was replaced by a one-piece cast metal flange, and the headstock shape and inlay patterns also changed.  #9488-30 is from one of the first lots of style 3 instruments made in this “new” configuration.  It remains in exceptional condition, especially considering the deterioration often observed in Gibson’s earliest die-cast flanges.  This example conforms to catalog specifications for the model with the exception of the peghead inlays, which are in the “flying eagle” pattern normally seen on style 4 and Granada banjos of the period.

The original owner of #9488-30 (see Gibson banjo serial numbers vs. factory order numbers) was Steve Molenda (1906–1972), who lived for most of his life in the South Bend, Indiana/Niles, Michigan area.  His nephew remembers that Mr. Molenda primarily played polka music with his brothers-in-law at family gatherings.