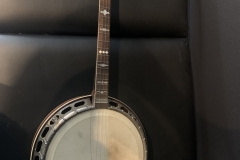 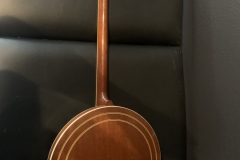 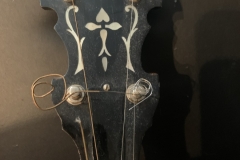 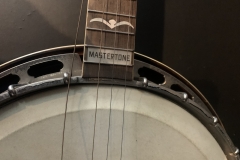 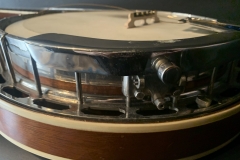 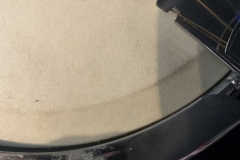 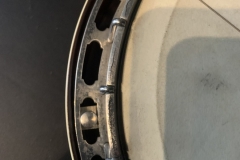 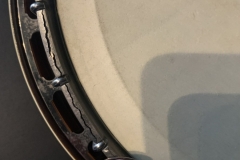 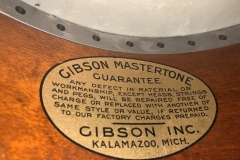 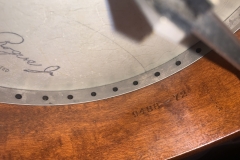 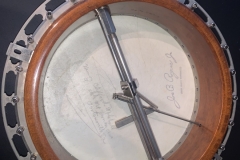 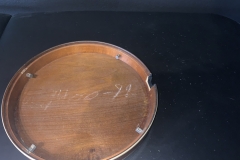 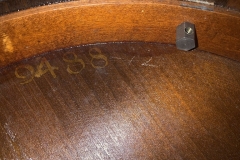 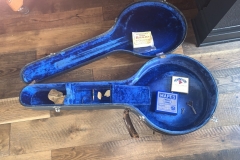 Style 3, the least expensive model in Gibson’s prewar Mastertone banjo line, was revamped in 1929.  The model’s straight-grained maple changed to mahogany, two concentric rings of white/black/white purfling were added to the back of the resonator, the brass tube-and-plate flange was replaced by a one-piece cast metal flange, and the headstock shape and inlay patterns also changed.  #9488-72 is from one of the first lots of style 3 banjos made in this “new” configuration.  It remains in excellent original condition with the exception of the tension hoop, which is showing disintegration due to “zinc pest“, a common problem with the earliest pot metal components supplied to Gibson by the Doehler Die Casting Company. This banjo is equipped with an armrest-activated “Vibrato Tone-Master” mute, a factory option at the time, and remains in its original plush-lined case with bracket wrench and case key.

The longtime owner of #9488-72 (see Gibson banjo serial numbers vs. factory order numbers) was Henry Clifford Mitchell, who wrote his name and home address on the underside of the banjo’s calfskin head. Mitchell learned to play the banjo in his youth in Portsmouth, Virginia; a 1936 graduate of the Virginia Military Institute, he later served as a civil engineer in the Pacific during World War II. #9489-72 remains in the Mitchell family.