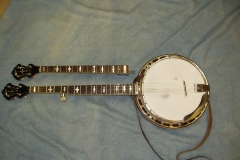 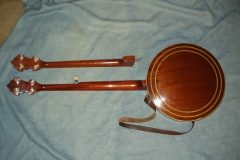 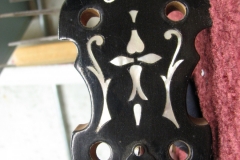 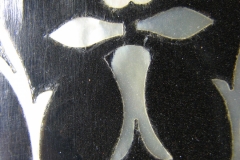 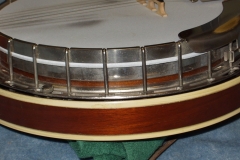 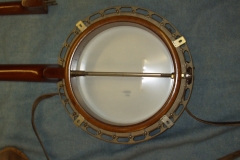 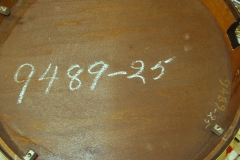 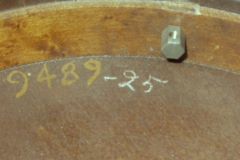 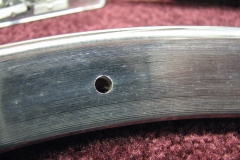 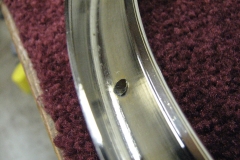 “This banjo was located in York, Pennsylvania in 1983. It was completely original with the original (painted) Rogers 3-star head and forty-hole raised head tone ring.  The banjo was received with a brass E-2 stretcher band which is presumed to be original although an early 1930’s replacement is a possibility.

Some years before, I had acquired a certified original twenty-hole flathead tonering. It was Christmas time 1971 and I was driving to Florida to visit my mother. An old friend from the Air Force days, Herb Schottland, was living in Jacksonville, Florida and going to school there. I stopped by to spend a day with him and his wife, Tressa.

While there, Herb mentioned that a friend, Bernie Michele (later known as Dixie Michele, luthier), had done some guitar repair for him and needed the money so we drove there–near Art Museum Drive, to pay him. While there, Bernie asked if either of us was interested in an original prewar Gibson flat tone ring. He explained that around 1966 he was interested in making replicas of these rings. He needed a sample to analyze and copy and had asked a friend in North Georgia, Amos Bigham, who dealt in such things, to find one for him.

Eventually Mr. Bigham located such a ring from a water-damaged banjo and sold it to Bernie. The tone ring venture never materialized and Bernie, needing cash, now offered it to me for forty dollars. He produced the ring, very dirty and wrapped in a magenta piece of felt. I did not really believe it was a prewar but figured it was worth the forty bucks anyway, so I handed him two twenties and we got in the car and went back to Herb’s.

When I returned home I threw the ring in a drawer and never looked at it again for many months. One day I was looking for something else and saw the cloth-wrapped ring, opened it up, and decided to at least clean it up. The more I cleaned the better it looked. By this time I had acquired an original flathead style 4 and compared the rings–it looked good. I tossed it in the car and drove over to Tom Morgan in Takoma Park, Maryland and asked ‘what have I got here?’ Tom eyeballed it carefully, made some measurements, and then got an original tone ring down off the wall of his shop (the ring belonged to his brother Ross). Comparing the two, he said ‘what you have is a nickel-plated twenty-hole tone ring from a prewar RB-3!’ Some months later I showed it to Harry Sparks, who agreed with Tom Morgan’s assessment.

I turned the rim on Larry Smith’s lathe in Brogue, Pennsylvania and installed the flathead ring in 1983. For about five years I used a Harry Sparks five-string flying eagle neck. The banjo currently wears a Gibson reissue RB-3 neck from 1988.”

Although it can’t be confirmed, there is a good chance that #9489-25 is the banjo pictured being played by Ethan Harrold (December 9, 1917–October 6, 2013) in 1930s photographs of Dean’s Banjo, Mandolin and Guitar Orchestra and The Banjo Four, both based in York, Pennsylvania.