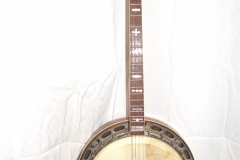 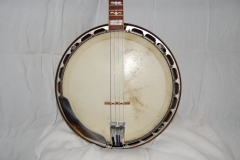 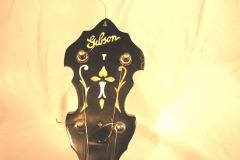 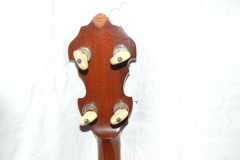 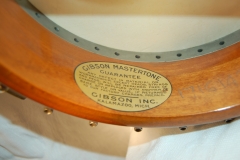 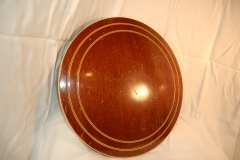 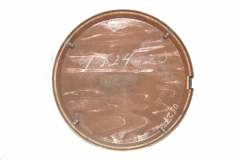 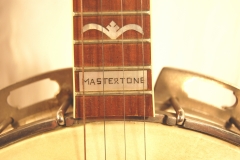 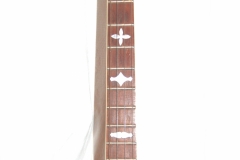 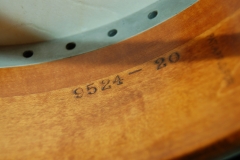 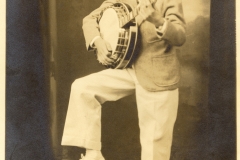 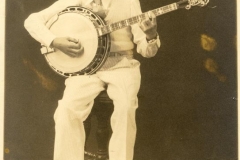 The TB-3 was the lowest-priced tenor banjo in Gibson’s Mastertone line.  This banjo conforms to standard catalog specifications for the style 3 beginning in 1929; the wood is mahogany, with two concentric circles of white/black/white purfling on the back of the resonator and single white binding.  The hardware is nickel-plated and the tailpiece is a Grover Presto; the rim is three-ply maple with a forty-hole archtop tone ring.  The peghead is double-cut and the inlay pattern is leaves and bows.

This instrument is unusual in that it is one of only two known archtop tenors from lot #9524, which consisted of over fifty PB-3 plectrum banjos with flathead tone rings and wreath inlays.  The rim shows an unusual horizontal seam just above the factory order number, and a Gibson employee’s “PB-?” designation, although largely obliterated, is still visible just under the chalk factory order number inside the resonator. It is not known why #9524-20 and its “littermate” #9524-5 were produced as archtop tenor banjos in this lot of flathead plectrums or why their rims were reconfigured from flathead to archtop configuration at the factory.

The original owner of this banjo was Donald C. Hill of St. Louis, Missouri, who is pictured here with the banjo at the age of ten.  Mr. Hill played in a band called The River Stompers in the St. Louis area and owned the banjo until his death in 2001.

NOVEMBER 2007 UPDATE:  A newly-discovered photo of Donald C. Hill (second photo above) shows that the neck currently on #9524-20, although definitely prewar, is not original to the banjo.  The new photo clearly shows the banjo with a Bella Voce inlay pattern in the peghead and a different variation of the leaves and bows pattern in the fingerboard.  How the neck replacement figures into the puzzling history of this banjo is not known.