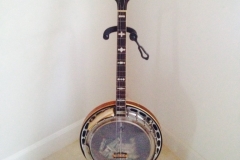 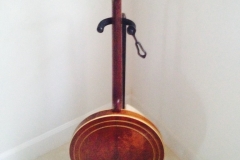 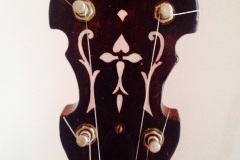 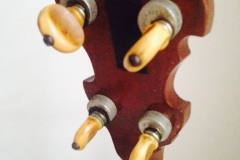 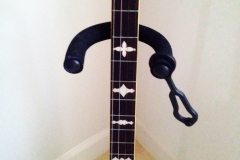 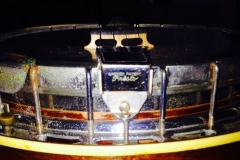 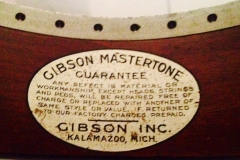 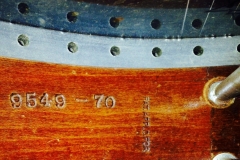 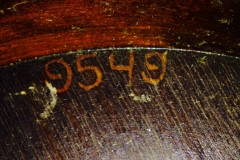 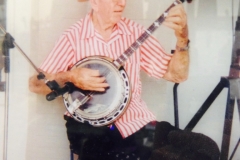 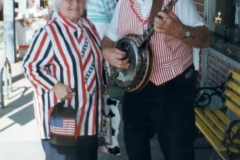 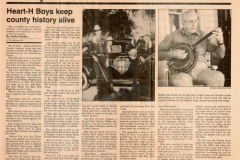 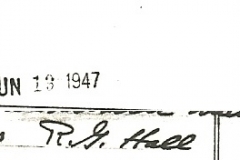 Style 3, the least expensive model in Gibson’s prewar Mastertone line, was revamped in 1929.  The model’s straight-grained maple changed to mahogany, two concentric rings of white/black/white purfling were added to the back of the resonator, the brass tube-and-plate flange was replaced by a one-piece cast metal flange, and the headstock shape and inlay patterns also changed; #9549-70 (see Gibson banjo serial numbers vs. factory order numbers) dates to the following year.

The original owner of #9549-70 was Robert G. “Bob” Hall, born on September 10, 1918 in Greenwich, New York.  Mr. Hall’s daughter recalls that “sometime in the 1930s when his family moved from New York to Florida, he was a teenager and looking forward to joining his friends working in the mills up north.  So his mother found a way to bribe him into moving to Florida-she would buy him a Gibson banjo!”

Hall was an accomplished banjoist and played in the 1940s with a string band known as the Heart-H Ranch Boys, who were Future Farmers of America state champions and who were documented in a 1940 field recording now archived in the Library of Congress.  Aside from a stint performing in Maggie Valley, North Carolina in the 1970s, Mr. Hall performed most of his life in the Orlando, Florida area until his death on November 23, 2003; his life and musical career were profiled in a 1993 Orlando Sentinel article.

Gibson’s original shipping ledgers indicate that Mr. Hall sent #9549-70 back to the factory for an unspecified repair and it was returned to him on June 19, 1947, misidentified by Gibson’s shipping clerk as a TB-4.

Photos courtesy of Karen Hall and the Hall family; photography by Seth Rhinehart.