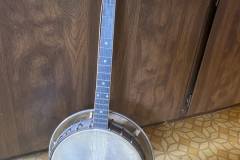 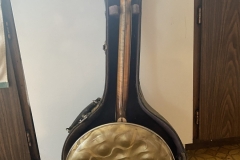 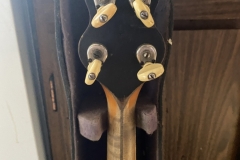 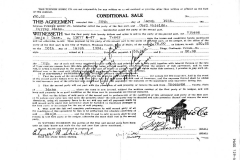 Gibson made a somewhat late entry into the banjo market in 1919 with a single model known simply as the “TB”, for “tenor banjo”.  Soon thereafter the company began to diversify its banjo offerings, and in the early years of production the next-to-most expensive banjo offered by Gibson was the style 4. The TB-4 seen here dates to 1924 (see Gibson banjo serial numbers vs. factory order numbers), one year before Gibson’s overhaul of its banjo designs and introduction of the new “Mastertone” line, and features a number of design elements typical of Gibson’s earliest banjos; the peghead is what later players and collectors would refer to as the “moccasin” shape, the curly maple neck is two-piece with a central rosewood strip, and the resonator is the concave “Professional Special” type (made of a celluloid known as “Pyralin”) sometimes seen in this period in lieu of the hinged “trap door” design.

Photos courtesy of the family of Elmer T. Shields.