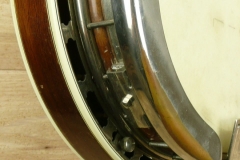 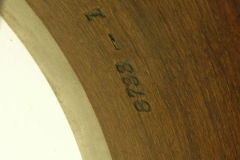 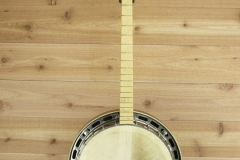 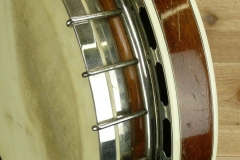 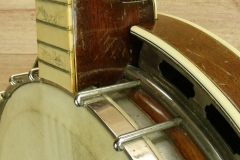 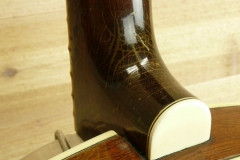 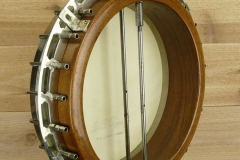 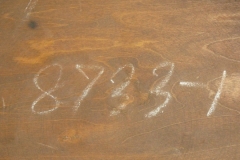 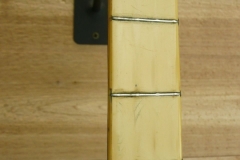 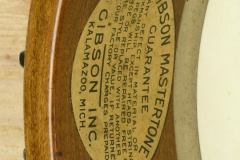 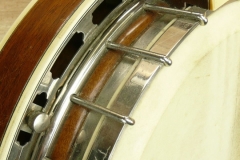 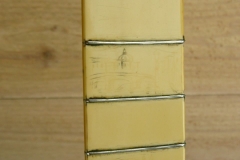 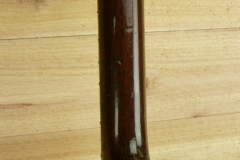 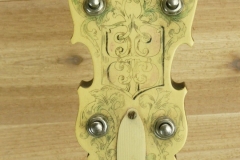 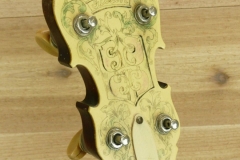 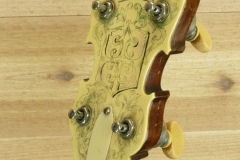 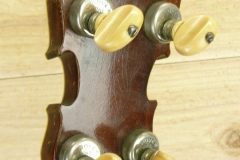 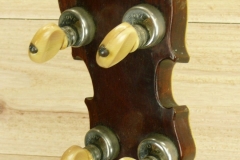 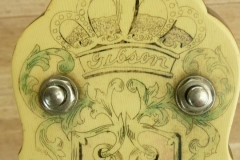 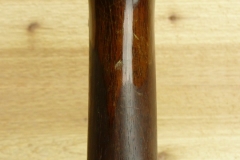 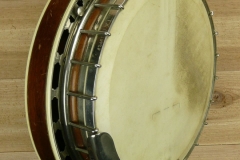 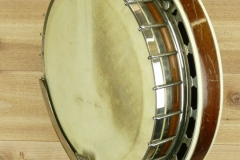 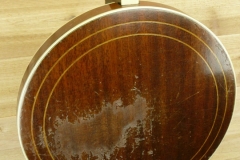 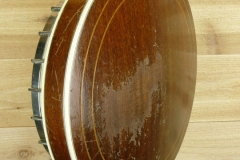 While the pot of #8733-1 (see Gibson banjo serial numbers vs. factory order numbers) conforms to standard specifications for a style 4 Mastertone from 1927, the neck is another story.  The mahogany neck with fiddle-shaped peghead does not feature the typical “hearts and flowers” inlay pattern of the 1920s style 4, but rather an ivoroid fingerboard and peghead overlay embellished with what appear to be hand drawings.  The peghead ornamentation includes the Gibson logo inside a crown similar to the one which would appear embossed on the back of the resonator of the Florentine model, introduced in 1927.  While some coloring is evident on the peghead, the ornamentation has a somewhat unfinished look; the fingerboard decoration has largely worn off, but the scenes which are still visible appear to possibly portray the Italian city of Florence and the surrounding Tuscan countryside.

A likely explanation is that this fingerboard and peghead overlay were prepared as a sort of preliminary “study” for the Florentine by Gibson artist Neil Kievit, profiled in Gibson historian Joe Spann’s book Spann’s Guide to Gibson 1902-1941.  Gibson banjo enthusiasts have long been puzzled as to why the production Florentine model depicts scenes of Venice rather than Florence; the existence of #8733-1 suggests that at some point in the development of the Florentine model, it was indeed intended to features scenes of its namesake location.

The Gibson factory was known for not being wasteful, and apparently decided to use this prototype peghead overlay and fingerboard to create a “custom” TB-4; the longtime, and likely original, owner of this banjo was Bob Wren, a member of the seminal Western swing band The Light Crust Doughboys.  #8733-1 remains in original condition with the exception of a replaced tailpiece and tension hoop and remained in the family of Bob Wren until 2013.