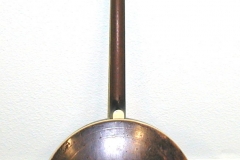 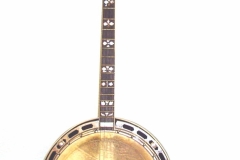 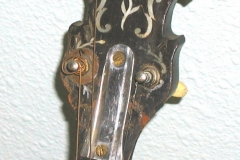 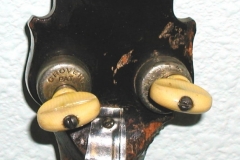 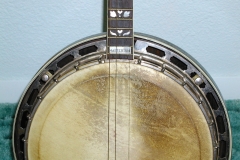 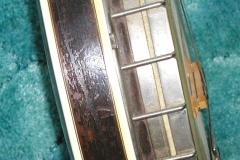 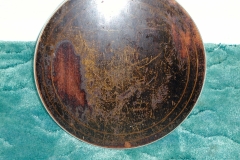 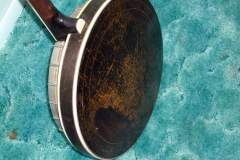 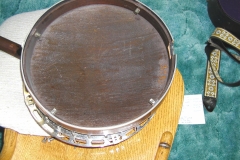 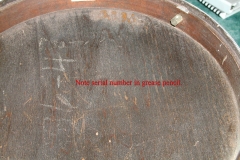 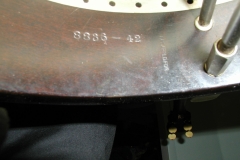 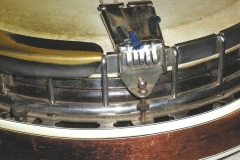 The second model up in Gibson’s Mastertone line, the style 4 of the late 1920s featured a mahogany resonator with two concentric circles of white/black/white purfling inlaid on the back, a mahogany neck, nickele-plated hardware, a two-piece flange, and either a no-hole or forty-hole archtop tone ring.  The peghead was fiddle-shaped and the inlays were in the hearts and flowers pattern.

After some evidently quite rough treatment in its first few years, #8836-42 (see Gibson banjo serial numbers vs. factory order numbers) found its way into the current owner’s family sometime in the 1930s.  One family member, a fan of the great four-string player Eddie Peabody, did learn to play it; however, with the advent of Elvis Presley the banjo was soon forgotten and put in a closet where it remained untouched for over four decades.  Happily, another family member is now an aspiring five-string banjo player and plans to give #8836-42 a new life with needed restoration and a five-string neck by Frank Neat.