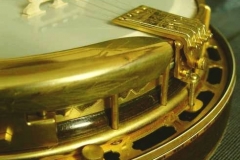 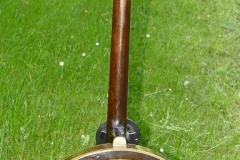 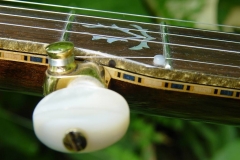 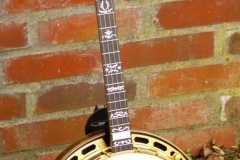 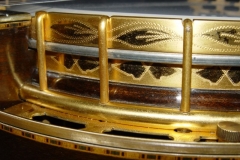 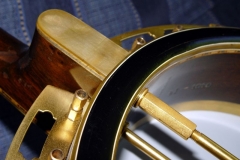 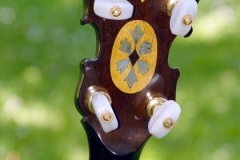 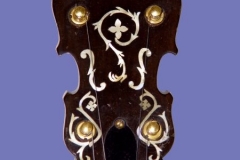 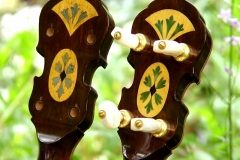 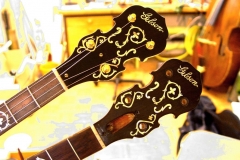 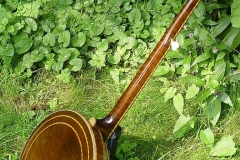 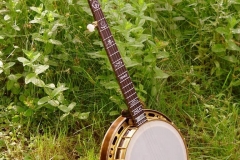 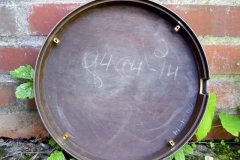 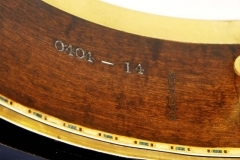 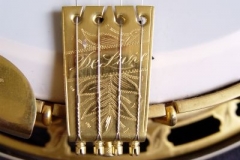 Style 5 was included in the original Mastertone line of 1925, one model above the Granada, and remained in production until about 1929 when it was replaced by style 6.  Style 5 banjos were gold-plated and heavily engraved, with two-piece flanges and either ball-bearing or archtop tone rings.  Ornamentation included multicolored wood purfling, multicolored wood inlay on the back of the peghead, and pearloid binding.  The peghead was fiddle-shaped, the inlays were wreath pattern and the neck and resonator were walnut.

This banjo is an extremely well-preserved example of a style 5 tenor with a no-hole archtop tone ring and has been converted to five-string with the addition of a neck by Bernd Gassmann.  The original Kerschner tailpiece is engraved “DeLuxe”.  Style 5 was indeed a deluxe model, as indicated by the presence of fancy purfling and binding on the bottom edge of the rim where it would be visible only when the resonator was removed.

By the late 1920s, Gibson’s banjo production had increased to the point that a second production line was apparently added for a time, with its own sequence of lot numbers beginning with zero.  #0404-14 (see Gibson banjo serial numbers vs. factory order numbers) and its “littermate” #0404-6 exhibit some of the inconsistencies frequently encountered in prewar Gibson banjos; while the two banjos are identical in most respects, #0404-6 has a forty-hole archtop tone ring and Grover clamshell tailpiece rather than the no-hole archtop tone ring and Kerschner tailpiece of #0404-14.