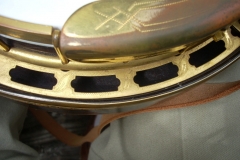 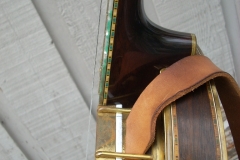 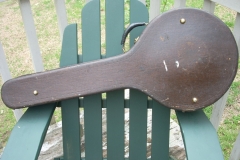 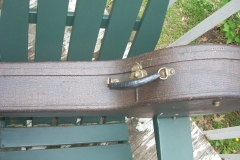 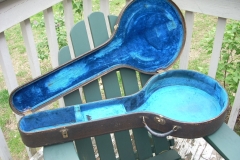 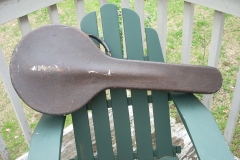 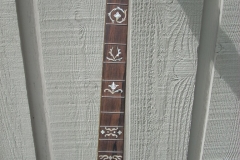 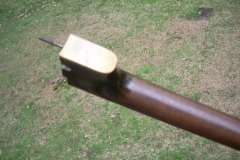 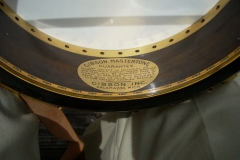 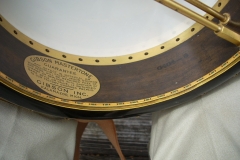 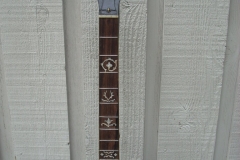 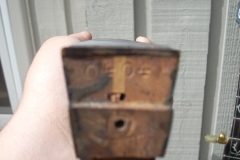 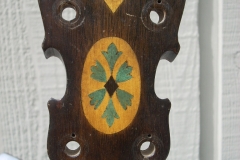 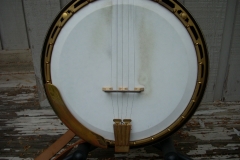 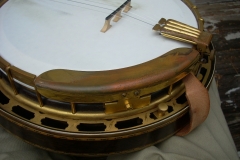 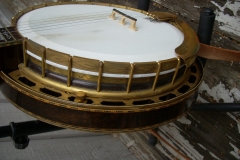 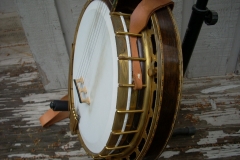 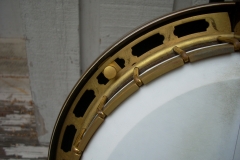 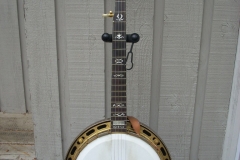 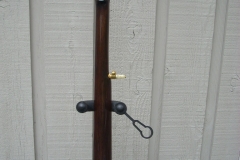 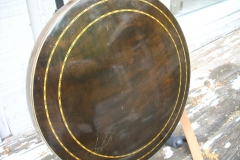 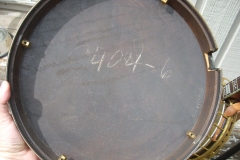 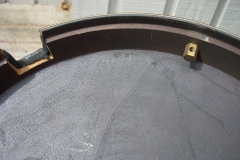 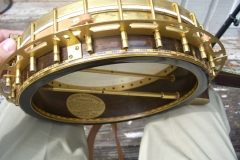 Style 5 was included in the original Mastertone line of 1925, one model above the Granada, and remained in production until about 1929 when it was replaced by style 6.  TB-5 #0404-6 (see Gibson banjo serial numbers vs. factory order numbers) is an outstanding example which has been converted to five-string with a neck by Dave Nichols.  In keeping with standard style 5 appointments, the hardware is gold-plated over copper flashing with engraving on the armrest, tension hoop, and Grover clamshell tailpiece, and on the skirt of the forty-hole archtop tone ring.  The neck and resonator are walnut trimmed with golden pearloid and multicolored marquetry; the presence of pearloid and marquetry on the bottom of the rim, visible only with the resonator removed, is evidence of this banjo’s “deluxe” status in the Mastertone line.  The banjo’s ornamentation even extends to the back of the peghead with multicolored wood inlay in an oval and fan pattern.

The tenor neck has a fiddle-shaped peghead with wreath inlays in a beautifully figured rosewood fingerboard.  In place of the standard Mastertone block at the nineteenth fret, there is a mother-of-pearl block engraved with the name of original owner Ray Roeller.  The lot number is stamped on the end of the neck heel; by the late 1920s, Gibson’s banjo production had increased to the point that a second production line was apparently added for a time, with its own sequence of lot numbers beginning with zero.  The original high-grade hardshell case features a brown imitation leather covering and blue plush lining.

The banjo’s current owner fill us in on a few more details:

“The only thing Nichols couldn’t duplicate was the golden translucent binding on the fingerboard.  So he used the modernish MOTS white variegated binding, which I then hand-painted with gold paint, and it looked perfect!  However after fifteen years now most of the gold paint has worn off and it for some reason is showing a blue tint on the binding now–that’s unintentional.  You can tell from the plate on the neck heel what the gold-painted version looked like that has not worn away. . .  this banjo has a BIG DEEP BOLD sound to it, quite unlike any archtop I’ve played before (and I’ve played lots).  Shrieking clear up the neck, but nice and ‘bongy’ down open.”