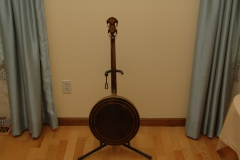 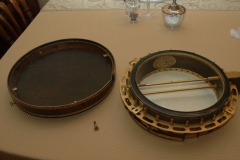 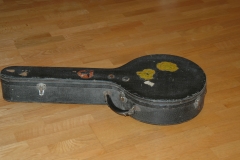 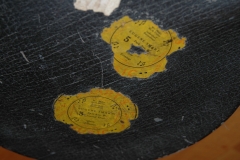 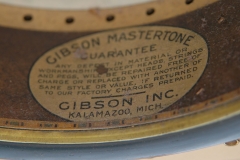 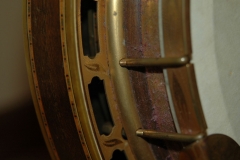 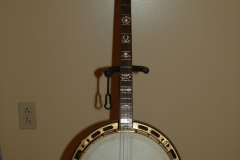 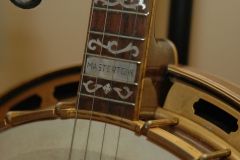 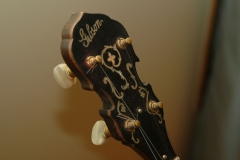 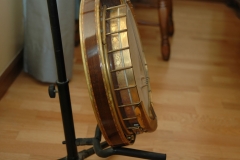 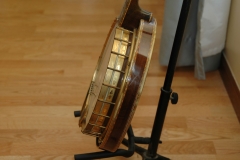 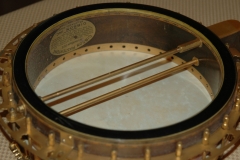 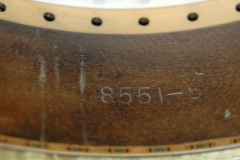 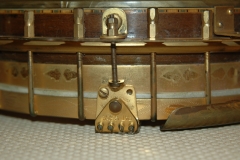 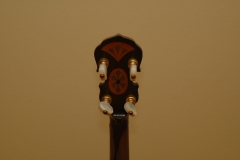 Style 5 was included in the original Mastertone line of 1925, one model above the Granada, and remained in production until 1928.  Style 5 had been the highest-priced, fanciest banjo offered by Gibson since the inception of the Mastertone line, but just after this tenor-necked example was made in early 1927, style 5 would lose its flagship status to Gibson’s new carved and painted Bella Voce and Florentine models.  #8551-6 (see Gibson banjo serial numbers vs. factory order numbers) represents style 5 in its last incarnation, with a forty-hole raised-head tone ring and a notched stretcher band with round hooks.

This example is in an excellent state of preservation with only normal playing wear.  The factory order number is stamped inside the rim using the larger, sans-serif font seen on a few scattered banjos from the 1930s; its presence on this 1927 banjo is, for the time being, inexplicable.  The banjo’s red-line Geib and Schaefer case would seem to date from the 1930s and is decorated with stickers advertising Eugene Smart’s music store in Mansfield, Ohio.