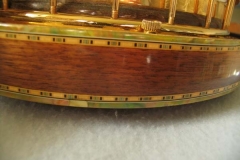 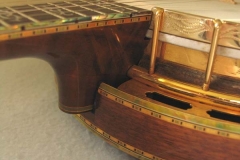 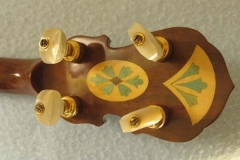 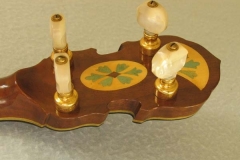 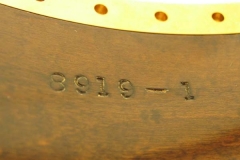 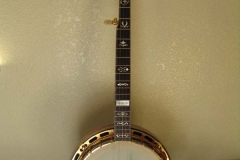 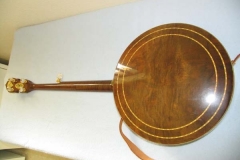 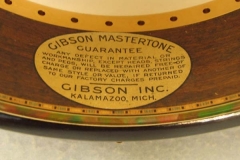 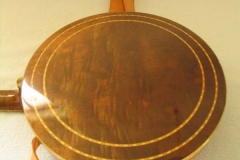 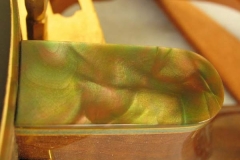 Style 5 was included in the original Mastertone line of 1925, one model above the Granada, and remained in production until about 1929 when it was replaced by style 6.  Style 5 banjos were gold-plated and heavily engraved, with two-piece flanges and either ball-bearing or archtop tone rings.  Ornamentation included multicolored wood purfling, multicolored wood inlay on the back of the peghead, and various types of fancy binding, including the “iridescent” variety seen here.  The peghead was fiddle-shaped, the inlays were wreath pattern and the neck and resonator were walnut.  Note the fancy binding and purfling even on the bottom edge of the rim, visible only with the resonator removed.

#8919-1 (see Gibson banjo serial numbers vs. factory order numbers) is an extremely well-preserved example of a late style 5 tenor with a forty-hole archtop tone ring and has been converted to five-string with the addition of a neck by Monte Hendricks, who used paua shell for the neck binding since the iridescent binding material used by Gibson was no longer available.