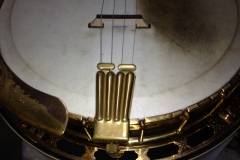 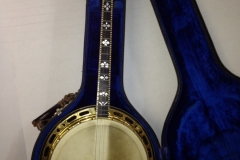 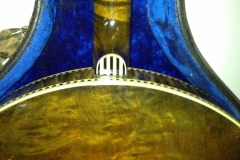 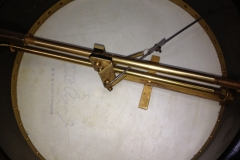 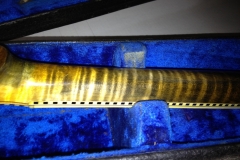 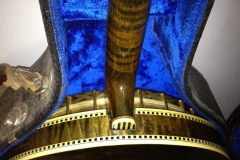 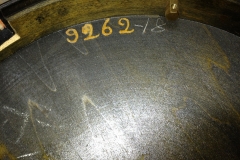 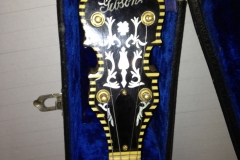 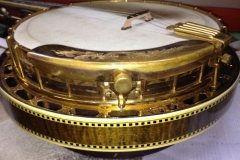 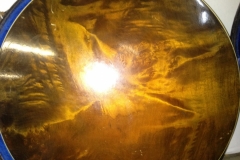 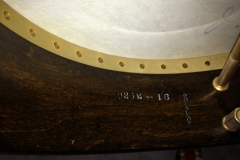 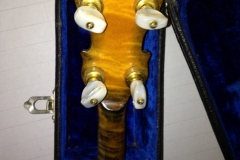 Gibson’s “Vibrato Tone-Master” armrest-activated mute, which company literature promised would provide the player “tonal control like an organ”, was introduced on style 6 and would soon become available on other Mastertone models, but it seems never to have gained widespread popularity among players.  What the article described as a “two-tone effect” was the new sunburst finish which Gibson referred to as “Argentine grey.”  One model up in the line from the Granada, the style 6 featured curly maple and gold-plated, engraved hardware.

Another distinctive feature of the new style 6 Mastertone was the “checkerboard” trim used in the binding of the resonator, neck, and peghead.  The inlays were a modified version of the “hearts and flowers” design which had been used on style 4 and Granada Mastertones as early as 1925.  #9262-18(see Gibson banjo serial numbers vs. factory order numbers) dates to 1929 and remains in excellent original condition, including its mute and plush-lined #509 case by Geib and Schaefer.