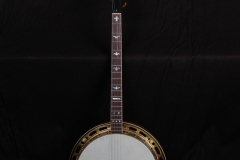 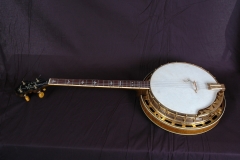 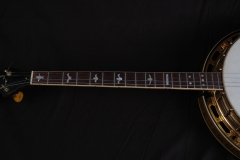 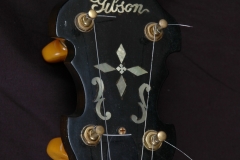 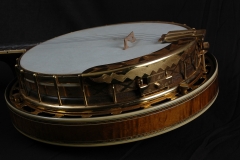 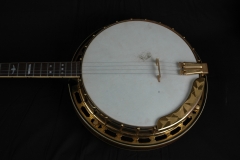 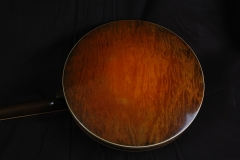 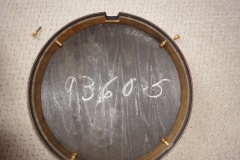 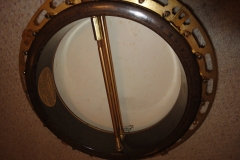 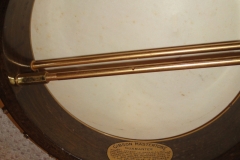 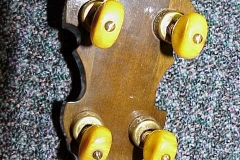 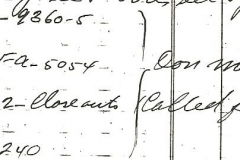 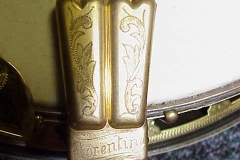 In 1928 Gibson introduced a new gold-plated, engraved banjo named style 6.  The next year a variation of the style 6 with gold-sparkle binding, a flathead tone ring, and a scale length in between that of the tenor banjo and the plectrum banjo was introduced as the Royal P-T.  Although Gibson touted the Royal P-T as “two banjos in one” and called it “a triumph of banjo discovery”, its reception among banjoists was lukewarm at best.  As a result, some surplus Royal P-T components remained unsold at the factory for a number of years, sometimes leaving the factory in unusual configurations in the later prewar and wartime periods.

#9360-5 (see Gibson banjo serial numbers vs. factory order numbers) is an example of such a banjo; lot #9360 dates to 1929, but this example did not leave the factory until 1940, when it was picked up in person on December 23rd by Don Merthe, a Gibson teacher-agent based in Elyria, Ohio.  The order that Mr. Merthe “called for” on that day also included a tenor ukulele, TB-1 #FA-5054, a “Special 5” (Gibson’s name for a black L-50 archtop guitar), two KG-22 “Kalamazoo” brand archtop guitars (noted as “closeouts”), one L-50 archtop guitar, and a V-25 Violin.  One can only speculate, based on the date, that at least some of these instruments may have been Christmas gifts ordered for students of Mr. Merthe.

The pot’s engraved tube-and-plate flange and engraved high-profile, lightweight flathead tone ring conform to Royal P-T specifications, as does the curly-maple resonator with gold-sparkle binding.  The grooved, engraved stretcher band, meanwhile, is the type used on ball-bearing Granada banjos in 1925 and 1926.  The one-piece armrest is engraved in the pattern used on some examples of the All American, introduced as Gibson’s most expensive banjo at the onset of the Great Depression and therefore doomed to be even more of a commercial failure than the Royal P-T.  The Grover “two-hump” clamshell tailpiece is engraved with a floral design and the word “Florentine“.

The neck of #9360-5 stands in stark contrast to the pot’s high-end, if rather confused, appointments.  The neck most closely resembles style 75, the budget-model Mastertone model of the late 1930s and early 1940s; the wood is mahogany and the double-cut peghead is inlaid with the diamonds and squares pattern that had been used on the style 3 circa 1925 to 1929.  The fingerboard, however, is inlaid with the fleur-de-lis pattern used on the style 1 non-Mastertone banjos of the 1930s.  The tuners are gold-plated, engraved Grover “two-bands” with large Catalin “gumdrop” buttons.

The factory order number is written inside the resonator in the manner used beginning in the late 1930s, with the large numbers running perpendicular to the strings and the small numbers written entirely in chalk.  There is also evidence of a previous factory order number having been rubbed out at the factory.

This example’s highly unusual combination of features definitely marks it as what collectors have come to refer to as a “floor-sweep” banjo, in the belief that decreased banjo production along with wartime material restrictions sometimes led factory employees to scavenge factory bins for whatever parts might be available to complete a banjo, regardless of the resulting departures from catalog specifications.  Gibson scholar Joe Spann, author of Spann’s Guide to Gibson: 1902-1941, has also established that unsold banjos remaining in inventory at the factory were often used by factory workers as a source of parts needed for repairs.  The pot-metal stretcher bands used on many Royal P-T and style 6 banjos were very prone to breakage, and the ball-bearing-era stretcher band currently on #9360-5 might be explained by the banjo’s original stretcher band having been robbed to complete a repair on one of its “cousins”.  When a buyer was later found for #9360-5, a replacement stretcher band was in turn needed for it and a discontinued Granada-engraved grooved stretcher band would have been a likely candidate.