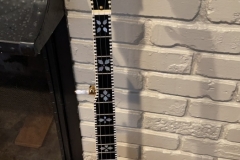 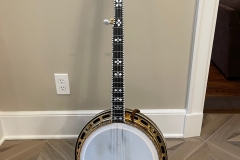 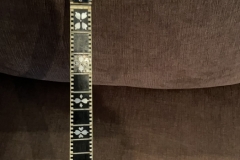 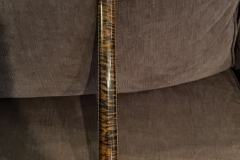 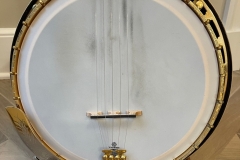 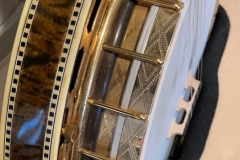 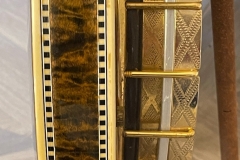 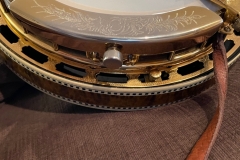 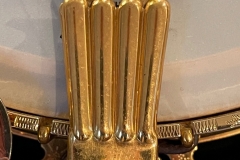 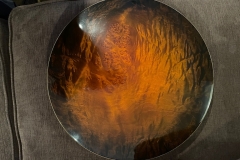 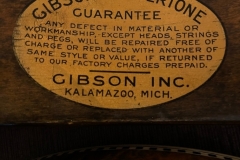 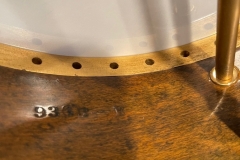 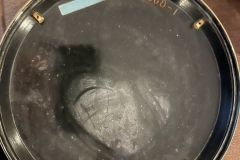 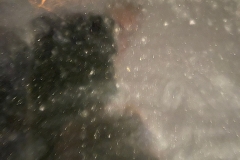 #9368-1 is a tenor-necked style 6 dating to 1929 (see Gibson banjo serial numbers vs. factory order numbers). Gibson’s “Vibrato Tone-Master” armrest-activated mute, which company literature promised would provide the player “tonal control like an organ”, would soon become available on other Mastertone models, but it seems never to have gained widespread popularity among players (the mute mechanism is no longer present in #9368-1). What the article described as a “two-tone effect” was the new sunburst finish which Gibson referred to as “Argentine grey.”  One model up in the line from the Granada, the style 6 featured curly maple and gold-plated, engraved hardware; the curly maple figure in the neck and resonator of this example is particularly dramatic.

Another distinctive feature of the new style 6 Mastertone was the “checkerboard” trim used in the binding of the resonator, neck, and peghead.  The inlays were a modified version of the “hearts and flowers” design which had been used on style 4 and Granada Mastertones as early as 1925.

The tenor neck of #9368-1 features the larger Gibson logo and slightly oversized inlays seen on some style 6 Mastertones; this banjo has now been converted to five-string with a faithful reproduction neck by Frank Neat.