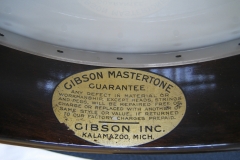 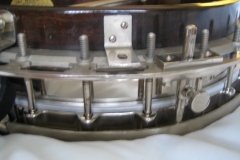 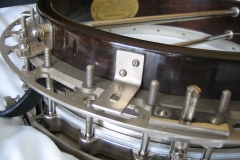 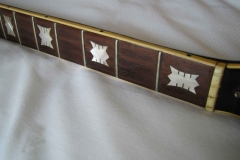 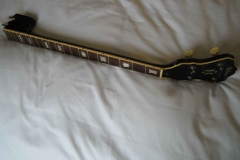 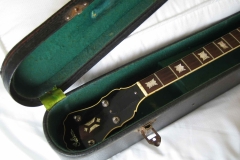 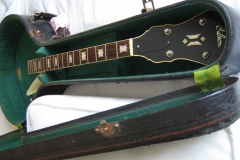 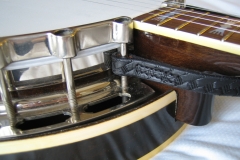 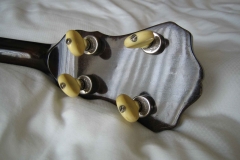 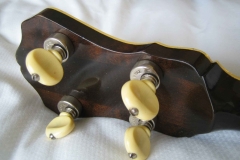 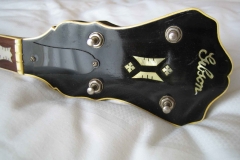 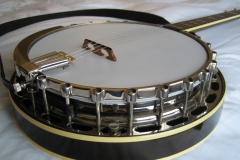 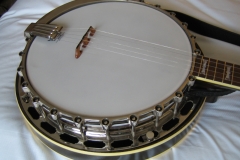 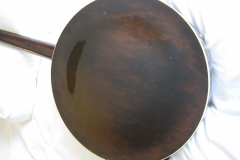 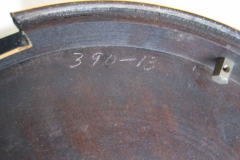 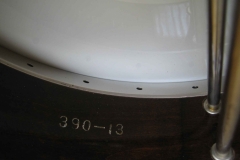 Gibson’s response was to dramatically overhaul its banjo line.  All existing Mastertone models were discontinued with the exception of style 3, which was lowered in price from $100 to $75 and emerged renamed style 75.  The other Mastertones were replaced by the new top-tension models, trumpeted in the 1937 Gibson catalog as “the alarm clock that is going to wake up new possibilities in banjo playing”.

The top-tensions were innovative in a number of ways.  The most obvious was their namesake head-tightening design; players no longer had to remove the resonator to make the frequent tension adjustments necessitated by calfskin heads, since the brackets were adjusted from the top of the pot rather than the bottom.  Top-tensions also featured distinctive solid wood resonators which were flat on the inside but carved with a pronounced hump on the back.  Other features of these radical new banjos were an easily adjustable armrest which could quickly be removed for head adjustment, radiused fingerboards, and bold Art Deco looks with large, geometric inlay patterns and a more guitarlike peghead shape.  For present-day players, one of the most important features of these top-tensions is the fact that they were the only prewar Gibson banjos on which flathead tone rings were standard.

The factory order number of this banjo is stamped in the rim using a different font than that normally seen on prewar Gibsons; this somewhat larger, sans-serif type can also be seen on RB-12 Mastertone #411-2 and TB-2 #824-10.  The banjo remains in near-mint condition and was recently acquired by Craig Korth from the family of the original owner.  It is accompanied by its original red-line hardshell case; the reproduction five-string neck was made by Robin Smith.

Surviving Gibson shipping records indicate that this banjo was originally shipped with a wrist-action mute which was available as an option on the top-tension models.  Somewhere along the way #390-13 lost its mute, but current owner Bill Kemp has located an original wrist-action mute and reinstalled it on the banjo.

Photos by Will White and Bill Kemp.