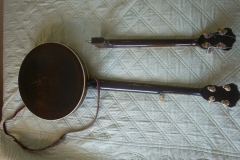 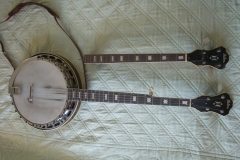 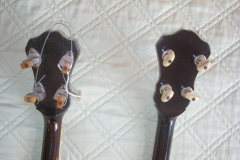 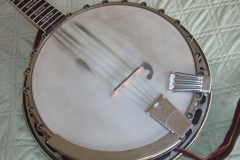 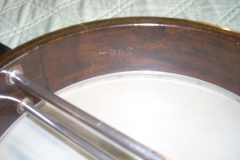 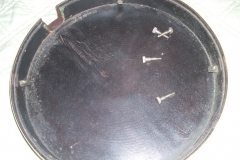 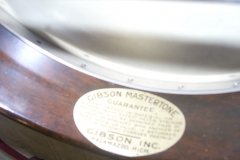 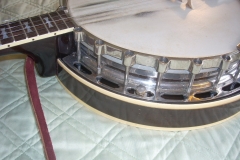 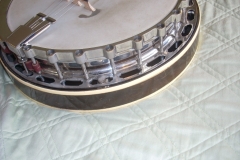 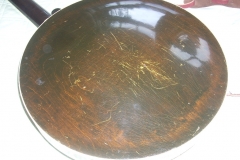 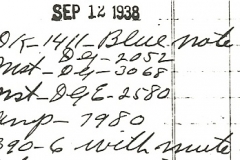 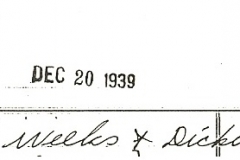 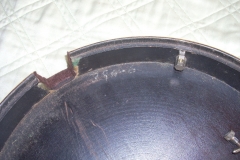 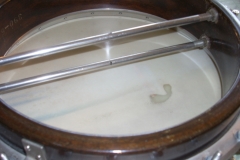 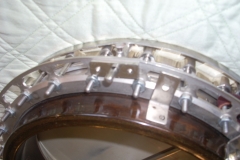 Introduced as part of Gibson’s overhaul of its Mastertone line in 1937, style 7 was the least expensive of the three new top-tension models.  #390-6 is from the second known lot of TB-7s to have been produced; it conforms to standard catalog specifications for the model with dark-finished maple, nickel-plated hardware, and “slashed bowtie” inlays in a radiused rosewood fingerboard.  The original tuners are the DeLuxe Kluson “stairstep” type with Catalin buttons.  The factory order number is stamped inside the rim in an unusual font only seen in a few scattered banjo lots in the 1930s.

The shipping history of #390-6 paints a picture of the lukewarm reception Gibson’s new line of banjos received.  This example was shipped on September 12, 1938 (with mute) to the large musical retailer Davitt and Hanser of Cincinnati, Ohio; Davitt and Hanser did not sell the banjo and it was returned to the factory in Kalamazoo, where it was shipped on November 24, 1939 to the Grossman Music Company of Cleveland, Ohio.  Having been returned once again, the banjo was shipped a final time on December 20, 1939 to Weeks and Dickinson of Binghamton, New York.

#390-6 (see Gibson banjo serial numbers vs. factory order numbers) was bought in a music store in Cortland, New York in 1958 and has been in the same family ever since; it is currently set up with a reproduction five-string neck by Dave Nichols of Malone, New York.