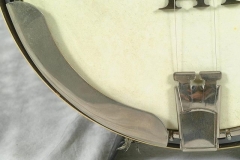 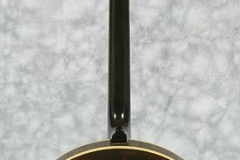 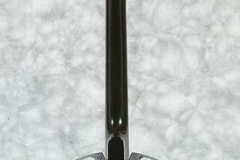 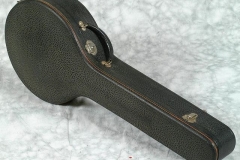 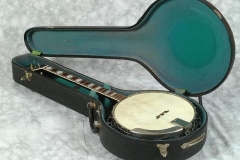 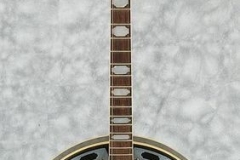 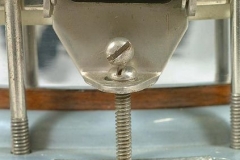 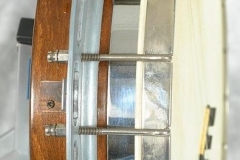 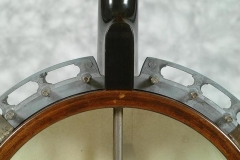 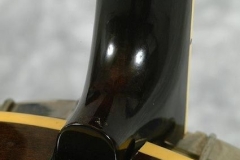 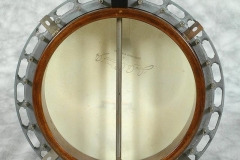 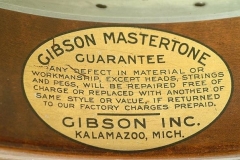 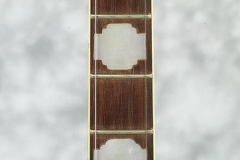 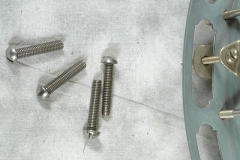 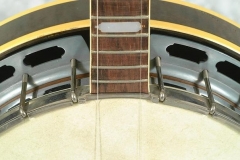 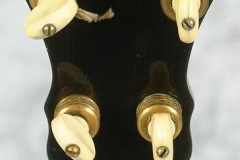 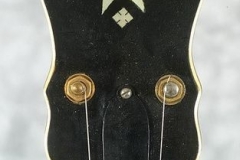 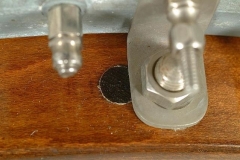 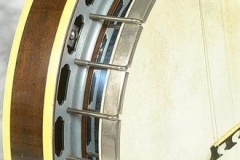 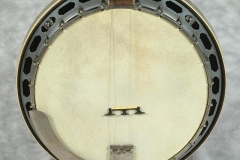 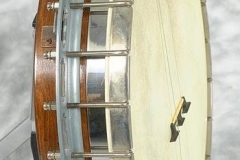 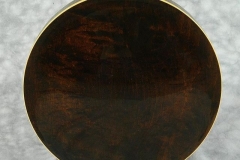 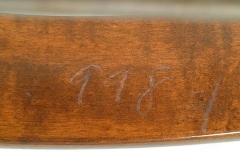 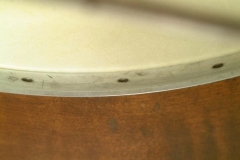 With the United States’ entry into World War II, wartime material restrictions meant that no new banjo hardware could be manufactured.  Banjo production had already decreased dramatically from its peak in the 1920s, and in the wartime period Gibson employees would sometimes search factory inventory for any remaining parts from which banjos could be assembled, even if the resulting instruments were a mismatch of various models.  #5998-1 (see Gibson banjo serial numbers vs. factory order numbers) is an example of such “floor-sweep” production practices taken to the extreme.  The maple neck, carved solid maple resonator, and peghead inlay are typical of the top-tension TB-7, although the rosewood fingerboard is inlaid with the “stairstep block” design usually seen on style 12 and style 18 top-tension models.

Despite #5998-1’s top-tension-style neck and resonator, the pot features the standard Gibson head-tensioning system rather than the top-tension arrangement.  This example appears to have been the only instrument in lot #5998 and it was shipped to a branch of the Grinnell Brothers music store on April 14, 1944 as a TB-7, with no indication that it was not actually a top-tension banjo.

The factory order number appears only inside the rim, written in what appears to be grease pencil; unlike some other floor-sweep banjos, #5998-1 does have a Mastertone label.  The tone ring is an original twenty-hole flathead with chrome plating, but doesn’t display the buffed inner face typical of Gibson flathead tone rings beginning in the late 1930s, which has led to the designation “shiny face” among players and collectors; this would seem to indicate that this tone ring had originally been intended for use in a plectrum or five-string style 4, the only chrome-plated Mastertone model of the earlier 1930s.  The one-piece flange is unplated pot metal, and the remaining hardware is nickel-plated with the exception of the resonator L-brackets, which are the thin, unplated type.  The coordinator-rod holes in the rim have been plugged and redrilled, indicating that the rim was mostly likely put aside earlier due to a worker’s error and then used later when parts were in such short supply.  The tuners are gold-plated, engraved Grovers as used on the top-of-the-line Florentine model of the 1920s .  The resonator is held on by ordinary slot-head screws rather than the specialized thumb screws normally used; these screws may be replacements for the originals, but they likely reflect further improvisation at the Gibson factory (see TB-7 Mastertone #F4713-2 and MB-11 #F5635-5).  The banjo remains in its original “red-line” #511 Geib case with green flannel lining.