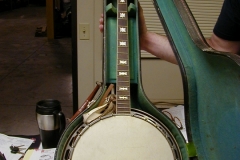 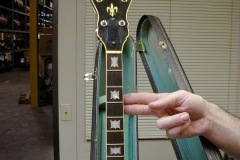 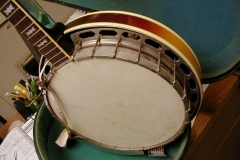 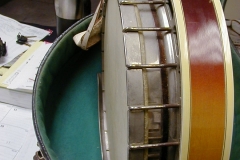 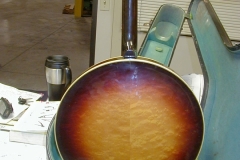 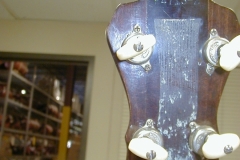 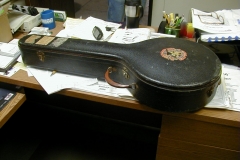 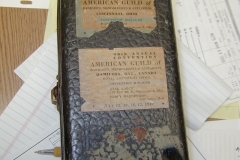 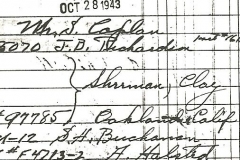 With the United States’ entry into World War II, restrictions on metals meant that no new banjo hardware could be manufactured.  Banjo production had already decreased dramatically from its peak in the 1920s, and in the early 1940s Gibson employees would sometimes search the factory for any remaining parts to fill the few orders that came in, even if the resulting instruments were a mismatch of various models.  #F4713-2 (see Gibson banjo serial numbers vs. factory order numbers) is an example of just such a “floor-sweep” banjo.  The solid, carved “bird’s-eye” maple resonator with sunburst finish is typical of the top-tension style 18 and the dark-finished maple neck with “slashed bowtie” inlays is typical of top-tension style 7, while the pot with nickel-plated hardware, one-piece flange, twenty-hole flathead tone ring, and standard Gibson head-tensioning system is like that found on style 75 banjos.  This banjo was shipped to teacher-agent Althea Halsted (1897-1984) of Olcott, New York on October 28, 1943 following an unspecified repair and listed in the Gibson shipping ledger simply as a TB-7, with no indication that it was not actually a top-tension banjo.  The shipping ledger shows four other banjos in lot #F4713 shipped in 1942 and 1943, some noted as TB-7s and some as TB-75s.

The fleur-de-lis headstock inlay was not a standard specification on any Gibson banjo but is frequently seen on instruments from the late prewar and wartime periods.  Other features common to this period include the clunky, horizontal Gibson peghead logo and the extremely simple tailpiece design.  The resonator is held on by ordinary slot-head screws rather than the specialized thumb screws normally used; these screws may be replacements for the originals or they may reflect further improvisation at the Gibson factory (see MB-11 #F5635-5 and TB-7 Mastertone #5998-1).  The banjo’s original red-line case is decorated with stickers from 1940s conventions of the American Guild of Banjoists, Mandolinists and Guitarists.