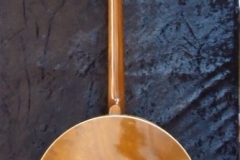 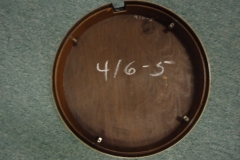 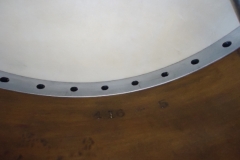 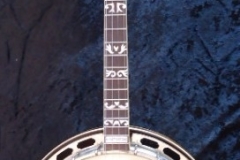 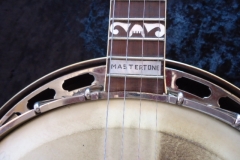 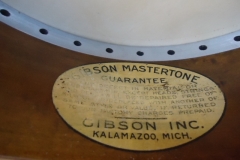 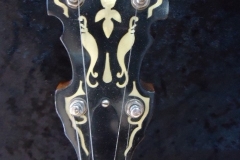 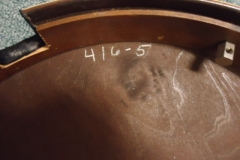 1937 was a year of great change in Gibson’s banjo line.  Mastertone models 4, 6, Granada, Florentine, and All American were discontinued and replaced with the new top–tension styles 7, 12, and 18.   Of the previous Mastertone models, only style 3 survived; its price was lowered from $100 to $75 and, in keeping with Gibson’s new fashion for naming instruments after their retail prices, was renamed style 75.

With the introduction of the top–tension models as the “flagship” Mastertones in the Gibson line, the retention of style 75 as a budget-model Mastertone gave the company an opportunity to use up leftover components from discontinued models.  #416-5 features the flying eagle inlay pattern which had been standard on the recently-discontinued style 4 and Granada; the resonator is walnut as seen on the discontinued sub-Mastertone style 2; a “littermate” to this banjo, TB-75 Mastertone #416-2, features the “flying eagle” inlay pattern, walnut neck, and burl walnut resonator with two rings of multicolored marquetry as seen on the recently-discontinued style 4.

#416-5 was originally shipped on September 19, 1938 to the Royal Oak, Michigan location of the Grinnell Brothers chain of music stores.