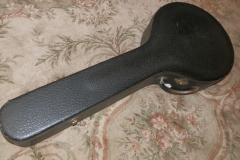 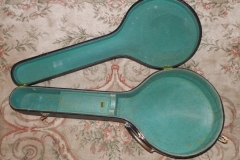 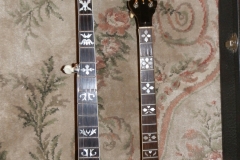 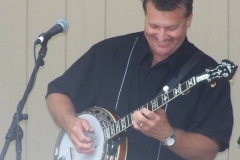 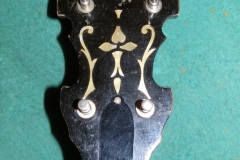 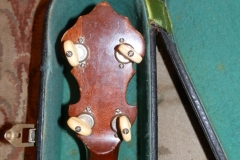 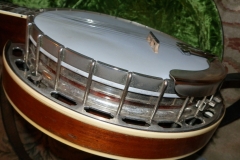 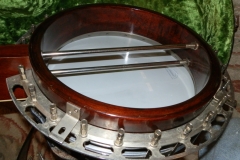 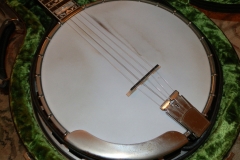 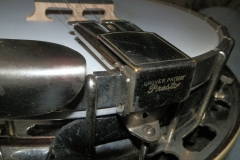 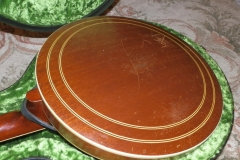 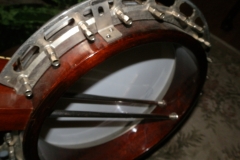 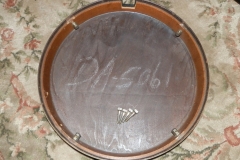 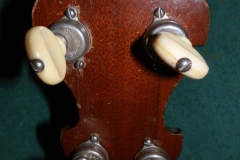 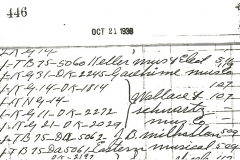 With the introduction of the top-tension models as the “flagship” Mastertones in the Gibson line, the retention of style 75 as a budget-model Mastertone gave the company an opportunity to use up leftover components from discontinued models.  TB-75 #DA-5061 features the “leaves and bows” inlay pattern on the peghead as seen on style 3 Mastertones of the 1930s (although with the horizontal logo characteristic of style 75) while the fingerboard is inlaid with the variation on the “hearts and flowers” pattern used on Studio King-branded banjos made by Gibson for Montgomery Ward in 1930, such as Studio King tenor #9717-11, the “Peter Miccio, Sr.”; Studio King tenor #9717-12; and Studio King tenor #9717-20.  Unusually for a tenor-necked style 75 banjo, the tone ring is a twenty-hole flathead rather than a forty-hole raised-head.  There is no Mastertone decal in the rim and the five-string Presto tailpiece is original.

This banjo bears a true serial number stamped on the back of the peghead and written in chalk inside the resonator (see Gibson banjo serial numbers vs. factory order numbers); original Gibson factory ledgers show that TB-75 #DA-5061 was shipped on October 21, 1938 to Eastern Musical Supply, identified by researcher Joe Spann as having been located in Falmouth, Maine.  TB-75s #DA-5060 and #DA-5062 were also shipped the same day to other Gibson dealers.

This banjo has now been converted to five-string with a neck by Frank Neat of Russell Springs, Kentucky.