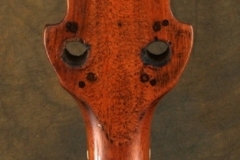 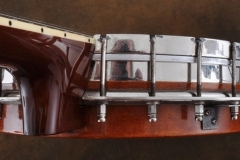 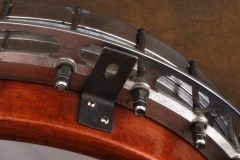 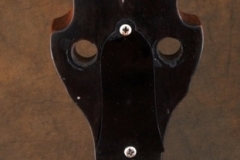 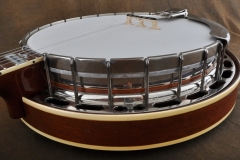 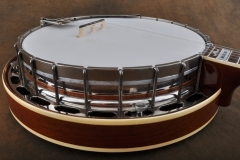 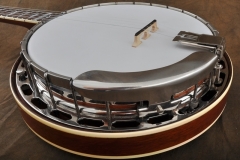 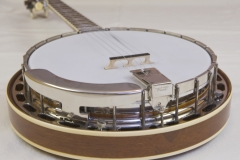 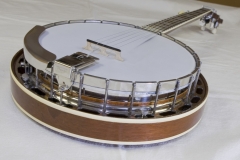 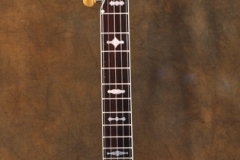 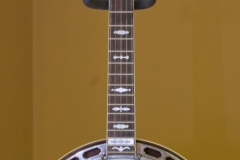 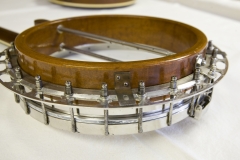 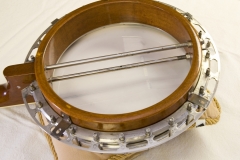 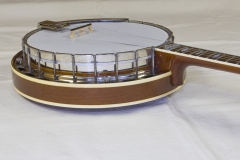 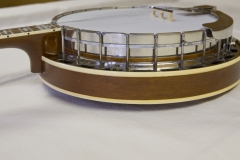 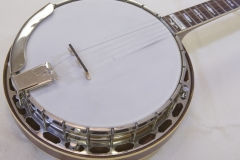 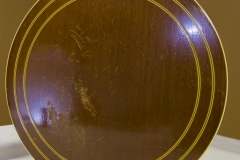 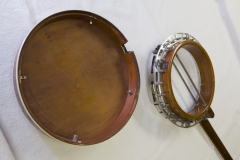 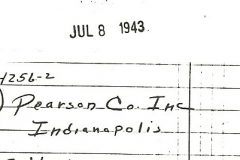 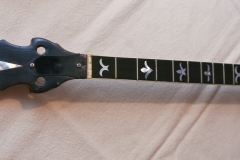 As the budget-model Mastertone, style 75 also offered the company a way to use up surplus parts from various discontinued models; further eccentricity was introduced into Gibson’s banjo production by wartime material restrictions, resulting in a number of “floor-sweep” banjos being assembled from any available parts with little regard to catalog model descriptions.  #E4266-2 (see Gibson banjo serial numbers vs. factory order numbers) was one of the last style 75 banjos to leave the factory during World War II and features a double-cut peghead with an elongated diamond inlay which had been used on some Gibson tenor guitars; the fingerboard is inlaid with the fleur-de-lis pattern used in the earlier 1930s on style 1 non-Mastertones, although the fingerboard is ebony rather than the standard rosewood.  The neck is mahogany with no volute and features peghead ears cut diagonally, both characteristics seen in Gibson tenor guitar necks; historian Joe Spann believes that this tenor banjo neck may well have been made from a tenor guitar neck blank.

Rather than the forty-hole raised-head tone ring typically seen on tenor-necked style 75 banjos, this example is equipped with a twenty-hole flathead tone ring weighing three and a half pounds, the heaviest known weight for a prewar or wartime flathead tone ring.  The somewhat taller tension hoop, short bracket nuts, large truss-rod cover, and Phillips-head screws throughout are all consistent with later prewar and wartime banjo production; the l-brackets are made of unplated steel.  In common with many wartime Mastertone banjos, there is no Mastertone decal inside the rim.

This banjo is now equipped with a five-string conversion neck by Steve Huber.