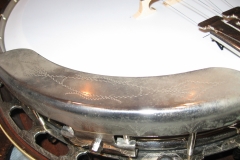 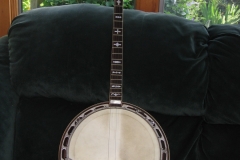 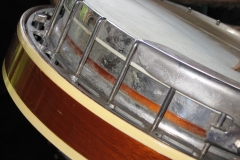 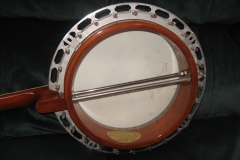 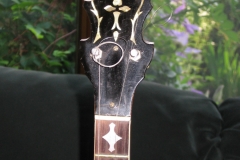 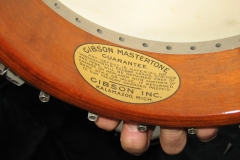 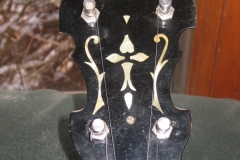 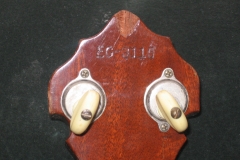 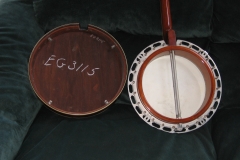 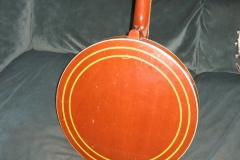 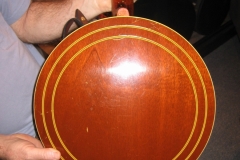 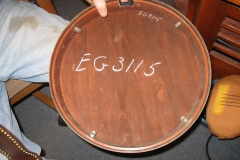 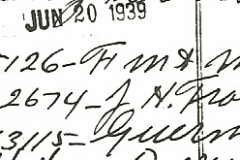 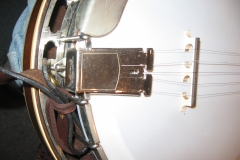 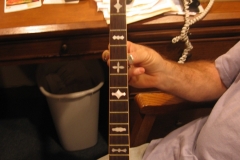 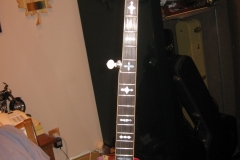 1937 was a year of great change in Gibson’s banjo line.  Mastertone models 4, 6, Granada, Florentine, and All American were discontinued and replaced with the new top–tension styles 7, 12, and 18.   Of the previous Mastertone models, only style 3 survived; its price was lowered from $100 to $75 and, in keeping with Gibson’s new fashion for naming instruments after their prices, was renamed style 75.

With the introduction of the top–tension models as the “flagship” Mastertones in the Gibson line, the retention of style 75 as a budget-model Mastertone gave the company an opportunity to use up leftover components from discontinued models.  #EG-3115 has leaves and bows inlays with the first-fret inlay turned sideways and a thicker, horizontal Gibson logo, both common style 75 characteristics.  The hardware is quite unusual including a Granada-engraved armrest and a tension hoop engraved in the pattern used on the Recording King model #507 tenor made by Gibson for Montgomery Ward and featured in that company’s fall/winter catalog of 1930-1931.   A small number of other style 75 banjos shipped in 1939 have been observed with original Granada-engraved armrests (see TB-75 Mastertone #EA-5337; PB-75 Mastertone #EG-4061; RB-75 #EG-4121, the “William R. Perry“; and TB-75 Mastertone #EG-7413),  The pot-metal one-piece flange is engraved in the pattern used on Gibson’s ultra-ornate, top-of-the-line All American model.

#EG-3115 was originally shipped on May 8, 1939 to M.B. Bollinger, identified by Gibson researcher Joe Spann as Mary B. Bollinger, owner of Bollinger Music and Jewelry Company in Oskaloosa, Iowa.  The banjo was shipped a second time on June 20, 1939 to Guernsey Music, whose location is unknown.

The serial number is stamped on the back of the peghead as was standard practice by this time; the letter prefix “E” denotes a production date of 1939 (see Gibson banjo serial numbers vs. factory order numbers).  This banjo is currently set up with a five-string neck by Bill Sullivan and an original five-string prewar Grover Presto tailpiece.