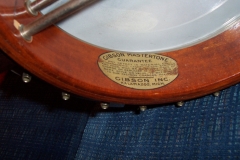 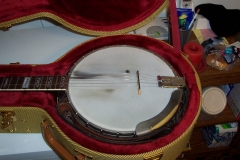 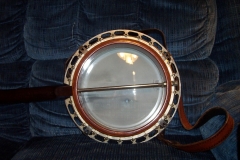 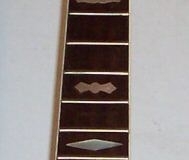 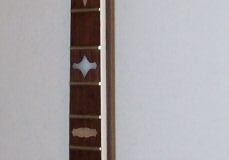 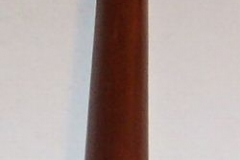 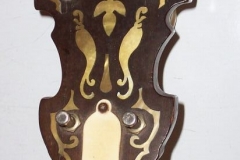 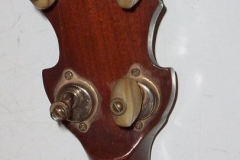 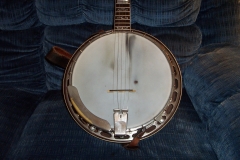 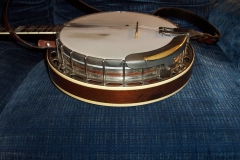 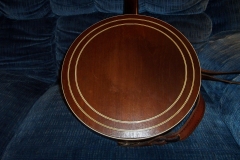 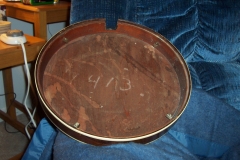 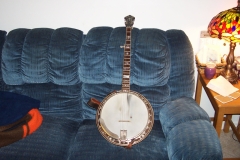 1937 was a year of great change in Gibson’s banjo line.  Mastertone models 4, 6, Granada, Florentine, and All American were discontinued and replaced with the new top tension styles 7, 12, and 18.   Of the previous Mastertone models, only style 3 survived; its price was lowered from $100 to $75 and, in keeping with Gibson’s new fashion for naming instruments after their prices, was renamed style 75.

By the time style 75 entered the Gibson catalogue, banjo production had declined dramatically and variations in inlay patterns became so common that it can fairly be said that there was not one standard style 75 pattern.  This banjo’s original tenor neck features the unusual inlay combination of the leaves and bows pattern on the fingerboard and the flying eagle pattern on the peghead.  The other unusual feature of this banjo is the Granada-style engraving on the armrest, which has been seen on a small number of other TB-75s from the same period.  Otherwise this banjo conforms to standard catalog specifications for style 75, with mahogany neck and resonator with two inlaid rings of white/black/white purfling, single white binding on the neck and resonator, a one-piece flange, Presto tailpiece, and nickel plating.  The original forty-hole archtop tone ring has been replaced with a flathead tone ring of unknown vintage, and the banjo is currently set up with a five-string neck in the wreath inlay pattern by Frank Neat.  The serial number is stamped on the back of the peghead as was standard practice by this time; the letter prefix “E” denotes a production date of 1939 (see Gibson banjo serial numbers vs. factory order numbers).