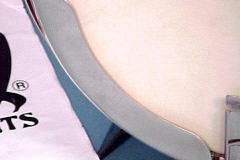 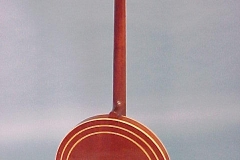 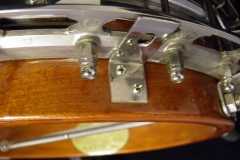 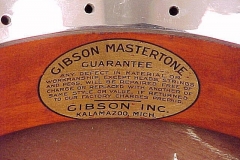 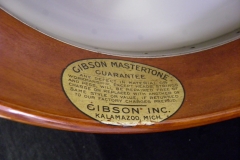 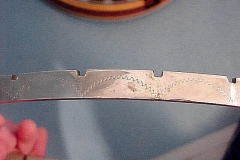 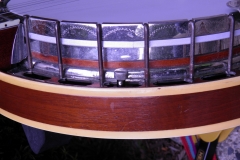 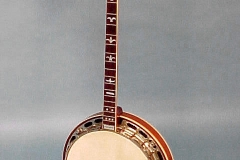 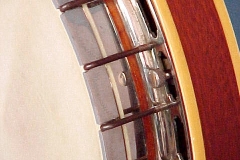 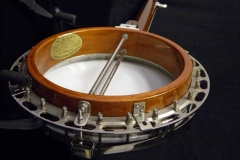 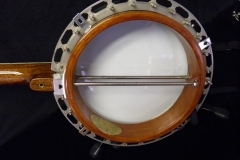 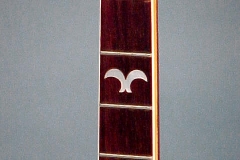 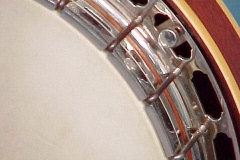 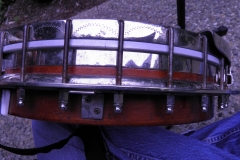 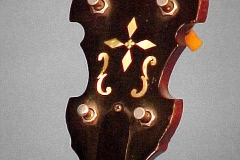 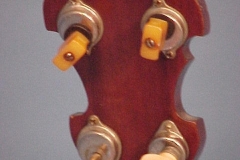 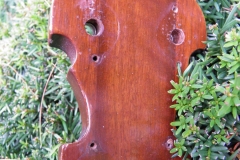 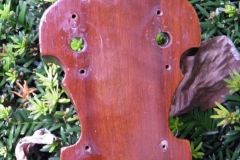 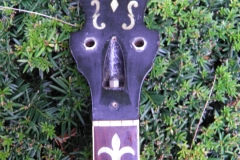 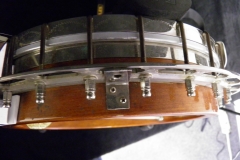 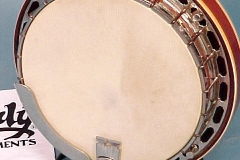 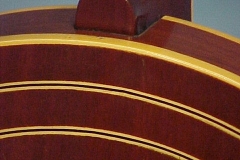 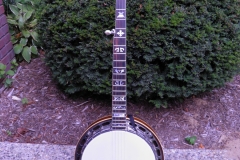 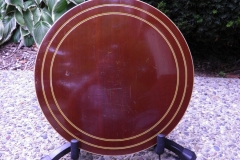 By the time style 75 entered the Gibson catalog, banjo production had declined dramatically and variations in inlay patterns became so common that it can fairly be said that there was not one standard style 75 pattern.  As the budget-model Mastertone, style 75 also offered the company a way to use up surplus parts from various discontinued models.  #F943-4 (see Gibson banjo serial numbers vs. factory order numbers) features a double-cut peghead with the diamonds and squares inlay pattern which had been used on the style 3 Mastertone of the 1920s (see TB-3 Mastertone #9308-39, the “Herbert A. Kennison”); the fingerboard is inlaid with the fleur-de-lis pattern used in the earlier 1930s on style 1 non-Mastertones (see TB-1 #9774-22, the “Dana Schweinle Scholl”), which in the late 1930s switched to simple dot inlays on the fingerboard (see TB-1 #917-18, the “Gordon Florey”).

In most respects the pot of #F943-4 conforms to standard specifications for style 75, although rather than the forty-hole raised-head tone ring typically seen on tenor-necked style 75 banjos, this example is equipped with a twenty-hole flathead tone ring of the later 1930s “shiny face” variety, featuring a buffed inner surface.  The tension hoop bears the engraving pattern which had been used on the considerably fancier Granada; engraved tension hoops and armrests originally destined for Granadas have been seen on a number of style 75 instruments.  The Phillips-head screws used in the L-brackets and truss-rod cover, as well as the short bracket nuts, are typical of late prewar and wartime Gibson banjos.

The shipping history for this banjo illustrates the low demand for banjos by the early 1940s, especially the more expensive Mastertone models.  #F943-3 was first shipped on July 25, 1940 (with no case) to the Bay City, Michigan branch of Grinnell Brothers Music.  The banjo was evidently returned unsold by Grinnell Brothers, as it appears for a second time in company ledgers being shipped on March 11, 1941 (this time in a plush-lined #509 case) to McMichael Music Co., most likely longtime Gibson teacher-agent William B. McMichael of Newark, Ohio.  Mr. McMichael must have returned the banjo almost immediately, and it was shipped a third and final time on April 7, 1941, again in a #509 case, to the J.H. Troup Music House in Lancaster, Pennsylvania.

Research by website visitor Randy Barrett has determined that the previous owner of #F943-4 shown in the two vintage photographs above was likely polka bandleader Steve Adamczyk.  The banjo has now been converted to five-string with the addition of a neck by Tom Nechville.

Photos courtesy of Elderly Instruments and an anonymous owner.