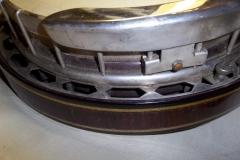 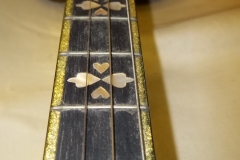 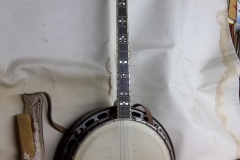 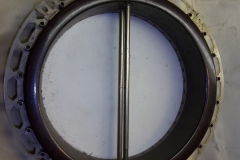 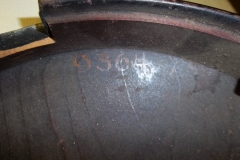 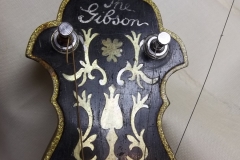 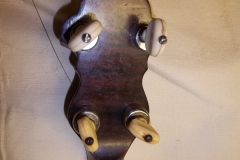 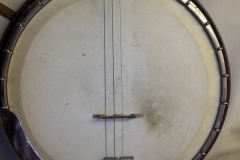 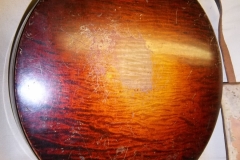 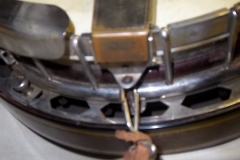 This instrument dates to 1929 and has to rank as one of the most interesting and unusual banjos produced by Gibson in the prewar period; the factory order number of 9364-1 (see Gibson banjo serial numbers vs. factory order numbers) would suggest that this banjo was likely a one-of-a-kind custom order.  In many respects #9364-1 resembles some of the banjos made by Gibson for Montgomery Ward under the Recording King brand, but this instrument is branded a Gibson and the neck is equipped with the adjustable truss rod that was missing from even the fanciest Recording King models.  Adding to the strangeness is the fact that the peghead logo is a silver silkscreened “The Gibson” as used on the lower-end, non-Mastertone style 1 of the 1920s.

The headstock shape is the same used on the Recording King models, as well as on the Gibson-brand style 11 and the closely-related banjos made by Gibson under the Kel Kroydon brand.  The peghead and fingerboard inlays are the modified hearts and flowers used on Gibson’s style 6 and Royal P-T banjos, but unlike those deluxe models, this example has non-engraved, nickel-plated hardware.  The gold-sparkle binding on the neck and peghead, another feature seen on style 6 and Royal P-T banjos, is somewhat different here because it appears to be gold glitter simply applied to the instrument’s surface.

The flange is the tube-and-plate design with hexagonal holes in the flange plate, another Recording King characteristic.  The highly-figured curly maple of the neck and resonator is also seen in some Recording King banjos as well as in the Granada of the same period.  One more unusual feature is the black binding on the resonator, not a standard feature on any Gibson-made banjo model.  The tone ring is a forty-hole raised head.