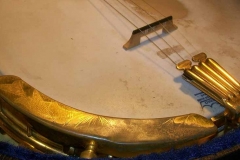 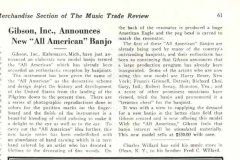 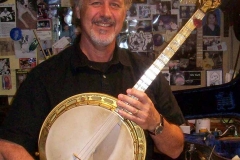 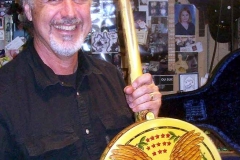 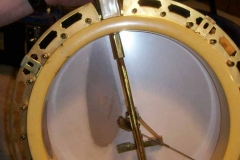 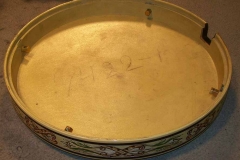 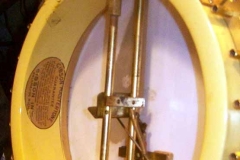 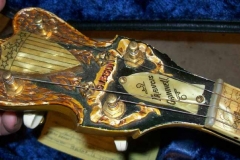 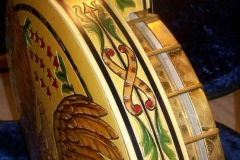 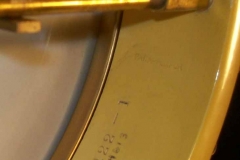 The June 1930 issue of Music Trade Review magazine carried an article headlined “Gibson, Inc., Announces New ‘All American‘ Banjo”.  According to the article, the model had been introduced “with a view to supplying the demand for a new banjo in the better class field”.  Gibson catalogs of the period described the All American model as “the Greatest Banjo of all Time”; the most expensive banjo ever offered by Gibson during the prewar years, the All American is a patriotic tour de force dominated by a carved American eagle peghead and a pearloid fingerboard decorated with hand-painted scenes depicting the progress of American history, beginning with the ships of Columbus and ending with Charles Lindbergh’s “Spirit of St. Louis”.  Elaborate carving and hand painting continue on the neck heel and sides and back of the resonator, where another American eagle continues the patriotic theme; all the metal parts are gold-plated and engraved.

TB-All American #9422-1, pictured here, was originally owned by Francis Grinnell, whose family owned Grinnell Brothers, Inc., a large Michigan-based music retailer of the period and a major Gibson dealer as profiled in Joe Spann’s book Spann’s Guide to Gibson 1902-1941.  Grinnell is mentioned in the Music Trade Review article as one of the artists using the new Gibson model; bearing the earliest known lot number for an All American banjo (dating to 1929) and a “bin number” of 1 (see Gibson banjo serial numbers vs. factory order numbers), this example is likely the first All American ever produced.

Despite Gibson’s hope that with the introduction of the All American, interest in the banjo would “be stimulated materially” (in the words of the Music Trade Review article), this new ultra-high-end model was a commercial flop; Gibson had chosen the dawn of the Great Depression to introduce a banjo which listed for $550, more than twice the price of the Granada.  This, combined with the fact that the guitar was supplanting the banjo in the popular music of the day, helps to account for the extremely low production of All American banjos; Joe Spann estimates the total at twenty-four tenor-necked examples and one five-string.

#9422-1 remains in excellent original condition and, in contrast to most All Americans which were equipped with forty-hole raised-head tone rings, this example features a no-hole flathead tone ring of unknown weight.