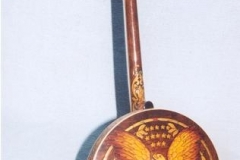 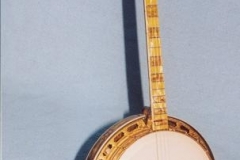 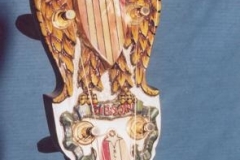 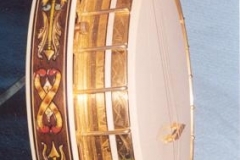 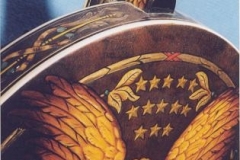 In 1930, Gibson introduced the All American model, which it described as “the Greatest Banjo of all Time”.  The most expensive banjo ever offered by Gibson during the prewar years, the All American is a patriotic tour de force dominated by a carved American eagle peghead and a pearloid fingerboard decorated with hand-painted scenes depicting the progress of American history, beginning with the ships of Columbus and ending with Charles Lindbergh’s “Spirit of St. Louis”.  Elaborate carving and hand painting continue on the neck heel and sides and back of the resonator, where another American eagle continues the patriotic theme.  All the metal parts are heavily gold-plated and engraved.  This tone ring is a forty-hole archtop; the flange on this later example is one piece.  The All American was offered in white holly or burl walnut woods; this example is walnut.

Gibson’s timing could not have been worse; they chose the dawn of the Great Depression to introduce a banjo which listed for $550, more than twice the price of the Granada.  This, combined with the fact that the guitar was supplanting the banjo in the popular music of the day, helps to account for the extremely low production of All American banjos.  Gibson historian Joe Spann estimates the total at twenty-four tenor-necked examples and one five-string.

While any All American banjo is extremely rare, #9747-3 (see Gibson banjo serial numbers vs. factory order numbers) is particularly remarkable because it remains in completely original mint condition.   It is in the hands of its second owner and has been displayed but never played.   When Gibson decided in 1969 to reissue the All American, this instrument was loaned to the factory as a model.