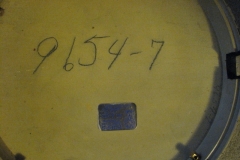 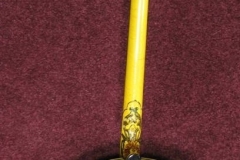 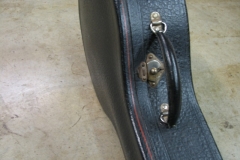 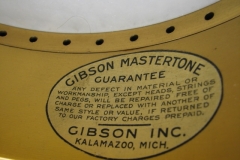 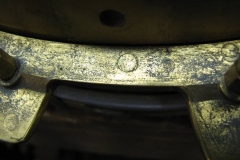 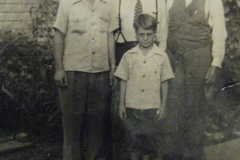 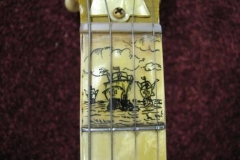 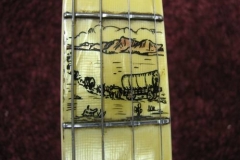 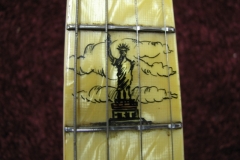 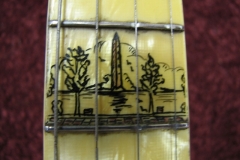 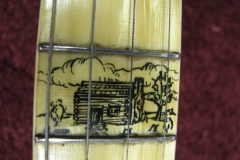 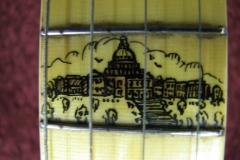 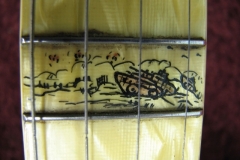 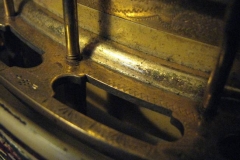 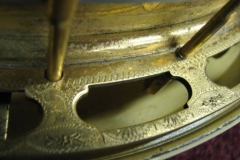 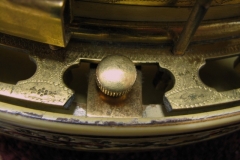 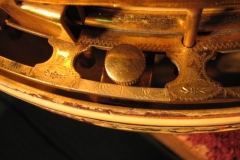 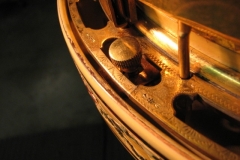 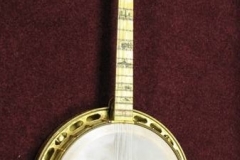 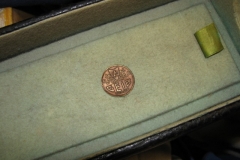 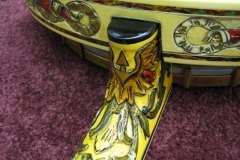 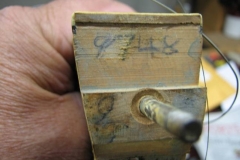 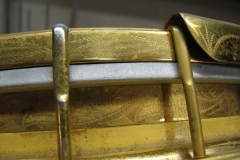 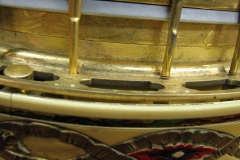 “Never has the musical world known an instrument so luxurious, so marked by distinction in every detail,” Gibson declared in its 1930 catalog in describing the new All American model, which it proclaimed simply as “the Greatest Banjo of all Time.”  The most expensive banjo ever offered by Gibson during the prewar years, the All American was a patriotic tour de force dominated by a carved American eagle peghead and a pearloid fingerboard decorated with hand-painted scenes depicting the progress of American history, beginning with the ships of Columbus and ending with Charles Lindbergh’s “Spirit of St. Louis”.  Elaborate carving and painting continued on the neck heel and sides and back of the resonator, where another American eagle continued the patriotic theme.  All the metal parts were gold-plated and engraved.  The All American was offered in “white holly” (actually white-painted maple) or burl walnut woods.

Gibson’s timing could not have been worse; they chose the dawn of the Great Depression to introduce a banjo which listed for $550, more than twice the price of the Granada.  This, combined with the fact that the guitar was supplanting the banjo in the popular music of the day, helps to account for the extremely low production of All American banjos; Gibson historian Joe Spann estimates the total at twenty-four tenor-necked examples and one five-string.

It comes as no surprise, then, that some All American components remained unused at the factory for a number of years.  Although the factory order number #9654-7 dates to 1930 (see Gibson banjo serial numbers vs. factory order numbers), this example was not assembled and shipped until ten years later.  While the neck (bearing factory order number #9748-2 on the heel) conforms to standard specifications for the All American (with the exception of the non-engraved tuners with white ivoroid, as opposed to genuine mother-of-pearl, buttons), the rest of the banjo was assembled using leftover components from various other high-end Gibson banjo models.  The resonator is the carved and painted type used on the Florentine model, the next-fanciest banjo to the All American, the stretcher band is the grooved type with flat hooks used on style 5 banjos of 1925 and 1926, the armrest is the two-piece type used on Granada banjos of the 1920s, the gold-plated and engraved forty-hole raised-head tone ring and “two-hump” tailpiece are those used on the Bella Voce model of the late 1920s, and the first-generation die-cast metal flange is gold-plated and engraved in the Florentine pattern.

This example was originally shipped from the Gibson factory on June 26, 1940 to Bellson Music Company in Saint Paul, Minnesota.  In recognition of the instrument’s many non-standard features, it was recorded in the company shipping ledger as a “Spl.TB.AA”.  Bellson Music Company was owned by Louis Bellson, whose brother Albert was also a Gibson dealer and whose brother Julius worked for Gibson from 1935 to 1970 and wrote the first history of the company in 1973.

Louis Bellson was obviously unable to find a buyer for #9564-7 and the banjo was shipped a second time on October 3, 1940 to musical wholesaler Davitt and Hanser of Cincinnati, Ohio.  From Davitt and Hanser the banjo went to Popp’s Music Store and Studios, a retailer located at 132 East 3rd Street in Dayton, Ohio.  Once again the banjo remained unsold and it was played by store owner Ed Popp as his personal instrument until his death in 1950.  The instrument remained in the Popp family until July 2010.

#9654-7 remains in excellent original condition including its #511 “red-line” case by Geib and Schaefer.  One small section of the pot-metal flange had broken out long ago and was repaired by Frank Schoepf using a piece from another broken pot-metal Florentine flange.